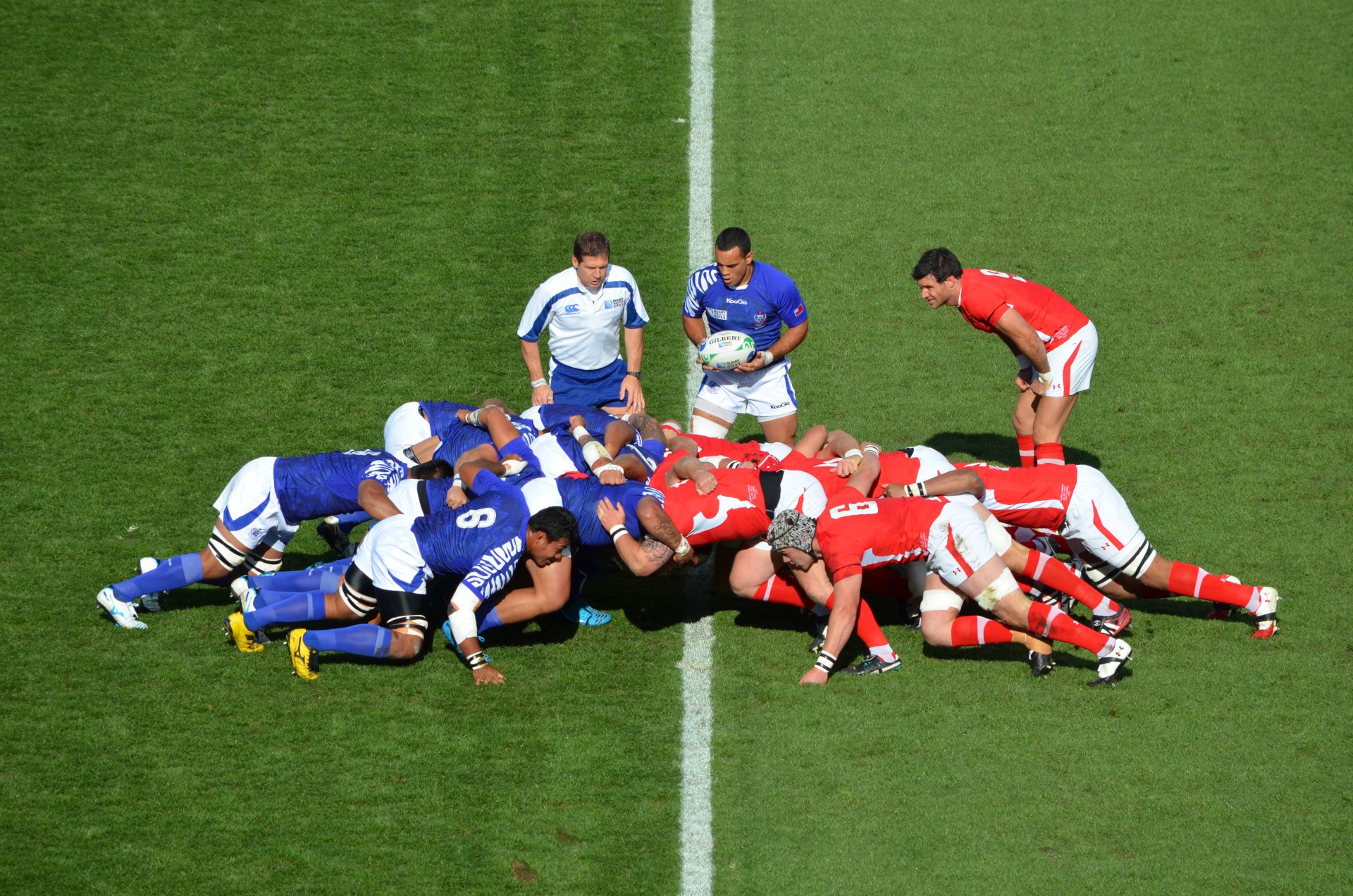 I was at a meeting with a General recently who pondered “when did we go from being an organisation whose default was to say ‘yes’ when asked for help, to saying ‘no’?”. Reflecting on this rhetorical question, I began thinking about why this change might have occurred whilst watching Rugby.

The Union code changed dramatically when it went from being an amateur to professional in 1995, probably around the time the General was a Junior Officer. Rugby like combat is a contact sport. It requires many of the values that the Army seeks such as; courage, loyalty, selfless commitment and discipline. I believe there are parallels that can be drawn between the professionalisation of rugby and the Army during the same time period, and why this General’s perspective may be coloured by his early service.

We would play international or club rugby, train on a Tuesday and Thursday and then play on the weekend and went back to work on a Monday1

Today’s professional rugby players main source of income is rugby, which was not the case prior to 1995. Neither professional rugby nor many of the roles in the Army naturally lead to other careers. In their early twenties whilst their peers are busy learning the fundamentals of a career that they may stay in for decades the rugby player and Army Officer are learning something doesn’t naturally take a route to another career.

Although the Army has been fully volunteer, and by definition professional since 1960, centuries old traditions still echo through the organisation, particularly the Officer Corps. Today their sole (or major) income is their pay. The International Institute for Strategic Studies (IISS) reckons that ‘in certain regiments there is still the tradition of the public schoolboy and the landed families with sons entering the army’.2 If the stereotype of the 1990’s is correct, some Army Officers receive a family stipend and had a flat in Chelsea. In today’s parlance these Officers may be considered Pro-Am (Professional-Amateur) Officers. They joined for a few years because it was a family tradition, for a few cheap ski seasons and then into business with the help of a well-connected family or through connections made at public school.

I largely disagree with the ‘landed gentry’ stereotype that the IISS espouses. In my three years on public duties in London, I don’t recall meeting any Officers who (openly) spoke about owning swathes of land, their title or second income even if the majority did go to public school. Just as the Officer of 2018 is unlikely to return to the family farm at weekends, post 1995 Andrew would no longer return to his role as a surveyor, formerly his primary bread winning career. In both fields, the full-time sole source of income is now their profession. There are two ‘so whats’ from this.

Firstly, Officers who attended private schools probably aspire to the same for their children.3 43% of those entering RMAS in training year 16/17 attended a fee-paying school whereas the percentage of wider society is around 7%. To afford this, a person’s family must have significant disposable income. The first black Officer4 (another group alongside state school educated entrants underrepresented in the Officer Corps when compared to wider society) to join the Grenadier Guards in 2007 was educated at Harrow. A year’s tuition at Harrow costs around £40,000 in post-tax income5. The Officer said he ‘wanted a profession that offered the benefits and lifestyle that the Army did’. One of those benefits is Continuity of Education Allowance (CEA). The Officer decides to either serve for a few years (the Pro-Am) or stay the course for the sake of their offspring.

As society has changed, so have Officers, and the mental calculations relating to life choices of those considering joining. In 1986, the Big Bang in London6 generated many well-paying jobs allowing private education for someone’s offspring and geographic stability that meant boarding school was unnecessary. Campaigns in Iraq or Afghanistan meant that death or surviving with a serious physical injury was a genuine risk. These combined to discourage some of the Pro-Ams who are now fewer and further between if they exist at all. Those that join are professional in every sense of the word, including the need to promote; any activity not central to the job needed to come with some career benefit to aid these aspirations.

Secondly, the current reporting system gives little scope for dissent. In years gone by, if an Officer with a second income wasn’t promoted this might not have affected their finances and as such their aspirations. It may have been easier for them to dissent, safe in the knowledge that pay was only a portion of their income. ‘The obligation to dissent’7 is a sign of a healthy organisation. It is a necessity at McKinsey, the global management consultancy that the Army is working with on one of its Officer Development programmes.

It is questionable whether many Officers ‘walk the talk’. Single source, subjective assessment alongside frequent changes in reporting8 increase the risk that dissent leads to not promoting. The Army Officer must avoid a self-inflicted promotional injury by dissenting. They need to focus on their career and anything not directly related to its progression is secondary. It is much easier to say ‘no’ largely unseen by the reporting system than committing to something that risks career damage.

So, with fewer Pro-Ams, (who were always leaving anyway so were not that interested in progression) and chances to promote is shrinking along with the size of the Army, helping others out and dissenting have become much less frequent. Where Officers lead, their charges follow and this problem has become organisation-wide as opposed to just limited to its Officer Corps.

The rules of the game

There is so much responsibility on everyone now in terms of interest and profile.9

‘Interest and profile’ are now also more important than they once were. Both fields have a deeply embedded culture of drinking. The professional era of rugby has bought with it change. The Leicester centre Manu Tuilagi missed selection for the 2015 World Cup after admitting assaulting a police officer after a heavy drinking session. This incident, unrelated to his professional ability, prevented his international selection which comes with it increased pay and opportunities for sponsorship. This is analogous to the Officer who is convicted of drink driving, close to one of their promotion points. Some would argue it is double punishment and unrelated to technical professional competence.

I sat next to a professional rugby player at a wedding last summer and offered to fill his glass with wine. He politely refused, sticking to water. Surprised by this I asked him why. He explained to me that ‘wine was empty calories’ and it may spoil a dietary plan carefully crafted by sports nutritionists. If the person he was competing with for a place on the team did not have a glass of wine that weekend and he did, would that place him at a competitive disadvantage on Monday training? The implication was a single drink could lead to a dip in performance, a change in his coach’s perception of him and him eventually becoming a bench player. If saying ‘yes’ to a request for help in the Army drew focus away from the 1 ups mission, was this career ‘empty calories’? If so why take the risk?

Saracens, unquestionably England’s most successful club of recent years, take an unconventional management approach when compared to its peers. It helps, if not insists, that its players prepare for a future after rugby.10 Some of the working week is set aside for study11, be that a business degree or a plumbing course. One bad tackle can spell the end of an otherwise promising career. The acknowledgement that rugby won’t last forever by giving of paid time to study shows that the club cares for its players in the long, not just short term. This intangible aspect of club life appears to be an aspect that build towards a winning culture. The reliance on being physically capable is as true in the Army as it is on the Rugby pitch. Just as one bad tackle on the Rugby pitch can end a career so one bad OJAR or SJAR can do the same.

Until a few years ago, asking for time to study anything not relevant to the Military would have been either sneered at or frowned upon. There are good moves afoot to remedy this, mainly (and arguably incorrectly) targeted at the Officer Corps. Anecdotally, most study seems to focus on subjects broadly related to the military. Favourites I’ve heard mentioned are military history or leadership studies. These are unlikely to help with employment after the Military, being broadly in line with a previous career.

Unlike Saracens the Army is unlikely to enable the study of a subject unrelated to the profession of arms, this is deeply embedded in the reporting culture. Might the individual studying be getting ready to jump ship?12 If that is the case, why give them that top job they wanted at the next job board? Likewise, with its soldiers, why would the Army let someone head off for a couple of weeks paid leave to do a brick laying course and then for a couple of weeks a year to gain some relevant experience. It may just hasten their decision to leave.

What does this all mean for the Army? The professionalisation of the Officer Corps has led to its members becoming something akin to ‘Rational Economic Man’13 seeking only to maximise personal career utility. Unlike in years gone by, it is now there only means of income. Officers more than soldiers, with aspirations for their children based on personal history ruthlessly prioritise the work that will aid their career progression. This attitude rubs off onto their soldiers who in turn become careerist. The mind set means helping others becomes low priority when compared to helping oneself: the default answer becomes ‘no’.

The Army does little to get its individuals ready for life as a civilian, afraid that doing so will make retention more difficult. This does nothing to narrow the gap between its soldiers and the rest of society. Ironically for some, this may accelerate their exit as they don’t want to fall too far behind their civilian peers.

The General may read this rather unusual perspective as to why the Officers and soldiers are less likely to go out of their way for others any more. As many Wavell Room articles point out, the root of the problem lies mainly in the reporting system. If he wants to go from ‘no’ to ‘yes’ he needs to start there.