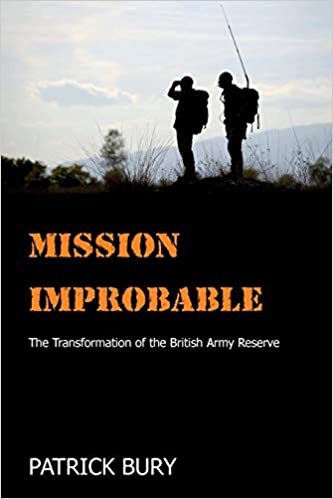 ‘Mission Improbable’ examines the evolution of the Army Reserve through the transformation of British military logistics over the past decade, focussing on how capabilities have been moved from the Regulars to the Reserves.  Through this, the book examines issues effecting the Reserves more widely, in particular the infantry, as a basis for comparison.

The first half of the book begins with the history of the Reserve from its inception, through both World Wars, moving to Options for Change and then to Future Reserves 2020 (FR20).  It offers perspectives from military sources and politicians, as well as other academics, authors and commentators.  The second half of the book examines how FR20 – and specifically the Reserve Logistic element – goes about delivering capability, maintaining cohesion and how it views its role in society.  This half makes wide use of interviews with Reservists, whilst still incorporating views from senior military and political figures.

‘Mission Improbable’ has been exquisitely researched.  In places, its level of detail reminded me of reading Anthony Beevor’s Stalingrad.  It includes references to other literature, both old and contemporary, primary interviews (attributed and not attributed) from senior figures in the military and from serving Reservists and Regular soldiers.  This gives the work a real sense of both believability and authenticity.

The book delves deep into the field of military logistical capabilities and considers both the classic logistic functions we all know (person driving lorry, eating a Yorkie bar), to Port and Maritime, to Royal Electrical and Mechanical Engineers capabilities, albeit in less detail.  Through this examination it considers many different angles; political, social, economic and of course military.  It makes good use of comparison between history and today, between Regular and Reserve logisticians and between logisticians and the wider Army.  These comparisons place the transformation of logistics into a wider context, which reinforce the sense that this book is grounded in sound research, and is well reasoned and logical.

However, it is not an easy read.  The first half, and parts of the second, at times read more like an academic thesis than a book.  The text is densely packed and there are copious references and footnotes.  I remember the relief of getting to the first set of interviews (which had more white space on the page) when it became easier to absorb what was happening.

The author makes frequent references to previous chapters or quotes.  Given how well it has been researched and the depth of material, this can make it hard (at times almost impossible) to make connections from one chapter to another.  There is also a good deal of repetition.  This appears to be done for emphasis but I feel that without some of this, the text could be less dense and the read an easier one for it.

The above quote sums up well one of the key observations of the book.  The Army Reservist of today wants to be able to go toe to toe professionally with their regular peer. Many of the changes that FR2020 have made have narrowed the gap between regular and reserve soldier. It gives a sound grounding in the psychology of the Reservist, why Reservists served in years gone by, and why those that serve now continue to do so.  It articulates some widely known truisms but supports a view on them with evidence.  As opposed to some commentators who take their own personal and blinkered view of Reserve service as indicative of how everyone else should think of reserve service.  In this regard, it is refreshing.  The most important revelation for me is how the Reserve still relies on social cohesion within their units.  It highlights the decline of bounty hunters, drinking clubs and with them the slowly improving image of the Reserves in the eyes of their Regular brethren.

The book is light on recommendations of how the Reserves could be reformed to become more effective, but I believe that the author did not set out to do this.  Nevertheless, this is an omission I would have liked to see included.  The author clearly knows his onions and his a contribution to the wider debate would be welcome.  However, his objective appears to be to record the changes in structure, rather than make judgements on them.

Overall, not the easiest read but an important contribution to the debate around the wider Army Reserve and military logistics. It offers a thorough analysis of the evolution of the Army Reserve and the political and military decision makers that were involved in this. It clearly articulates how the recent changes have, after some hard work led to a greater sense of, and actual professionalism in the Reserves. Bury clearly has a wealth of knowledge regarding both the capabilities and psychology of reserve service, a powerful combination. This book should be read by anyone with more than a passing interest in the reformation of the Reserves.