Executive summary: Israel is following a policy of ‘cumulative deterrence’ in an attempt to get peace with its neighbours.  Cumulative deterrence is premised on using disproportionate force as an answer to a provocation.  While this has bought it extended durations of peace, an enduring period (of peace) will not come its way because of the stakes involved for its adversaries.  This has been increasingly acknowledged within Israel.  The only way out is adhering to the principle of ‘benefit of the other,’ enshrined in the Treaty of Westphalia.

The Israeli-Hamas engagement, which ended with a ceasefire on May 21, was rekindled within a month by fresh air attacks by Tel Aviv in response to incendiary balloon strikes from Gaza.  This was the inevitable violence after a short duration of peace; inevitable because of the strategy of cumulative deterrence that Israel practices.

In classic deterrence theory, violence constitutes failure of deterrence.  In cumulative deterrence, however, disproportionate kinetic action is used to build up a ‘tough guy’ image.  The aim of this is to convey to the adversary that any inappropriate action would invite retribution more violent than the previous one.  Dr. Eitan Shamir of Bar Ilan university wrote in the October 2011 issue of Strategic Insights, a publication of the US Naval Post Graduate School, that David Ben Gurion believed that “the outcome of every round of violence should leave no room for interpretation.  The victorious should be undisputed and the price paid by the vanquished in prestige and material should be sufficiently heavy that they lose their appetite for another round in the foreseeable future.”  This policy is being continued to this day, re-termed as “Victory Doctrine”.  The use of ‘doctrine’ for describing Israeli ‘concepts’ is disputed, but the underlying premise is the same.  This article examines whether ‘cumulative deterrence’ can usher in sustained peace in West Asia, and argues that it cannot.

Deterrence, at a fundamental level, is a psychological game.  It is not the power to cause damage but the belief in the deterrer’s capability to cause injury that is the crucial determinant.  In this game of ‘who blinks first,’ the words of Thomas Schelling come into play; “Opposing force may cancel each other but pain and grief do not.”  The brute force of Israeli military technology is attempting to inflict, what Tel Aviv thinks, is unacceptable pain on the Palestinians.  It’s a moot point and the real question to ask is whether the Palestinians themselves feel that it is unbearable.  The threshold of unacceptable pain, thus, is the line demarcating peace from conflict.

The past two decades show that Israel’s massive retaliation threat has not deterred its opponents from targeting it with rockets (of increasing ranges) and lately newer weapons like suicide drones.  In the first intifada (December 1987 – 1993) the casualty count was 1240 Palestinians and 421 Israelis.  In the second intifada (September 2000 to end-2005) the Palestinian lost 3300 dead while the Israelis had 1000 dead.  After the targeted assassination on 14 November 2012 of the head of Hamas’ military wing, 174 Palestinians died and 1,225 were wounded by 1,500 Israeli strikes while six Israelis were killed.  Then came the ‘51 day war’ in 2014 in which, according to a United Nations report, Israel conducted 6000 airstrikes and fired 50,000 tank and artillery shells resulting in 1462 Palestinians dead and 100,000 residents homeless.  The Palestinians fired 1753 mortars killing 6 Israelis and injuring 1600.  The May 2021 engagement has seen demolitions of high-rise buildings with specialist weapons and the widely publicised 160 aircraft strike on the ‘metro’, the underground tunnel network of Hamas.  When the ceasefire was implemented the count in this war stood at 243 and 12 fatalities in Gaza and Israel respectively, with hundreds injured.

The problem with violence

In war, a guiding code, both legally and morally, for the application of force is the principle of proportionality.  Israel’s cumulative deterrence strategy violates this.  Cumulative deterrence feeds on its own failure as it requires greater and greater use of force to be applied.  Seen dispassionately, Israel is itself being coerced to live up to its policy of disproportionate response or lose face.  In Diplomacy Henry Kissinger wrote “nations cooperate when they share common political goals and that …. policy must focus on these goals rather than on the mechanisms used to reach them.”  Palestinian violence arises from a feeling of disenfranchisement of territories which they claim to be theirs; Israel has its own arguments.  At present both sides are focusing on the methods (violence) and not on the goal (peace with dignity).  Military tech‑wizardry like the Iron Dome air defence system may provide a measure of physical security but they should question if such ‘last mile’ protection can be successful in the long run?  Can air power used to bring down twelve storey buildings, seen live on social media, attack an ideology or a feeling of humiliation that is resident in the mind?  After the May 2021 cease fire, Basem Naim of the Hamas Council told the BBC that he was skeptical whether the truce would last “without justice for Palestinians.”

What do some independent voices in Israel say?  In an amazingly frank 2012 documentary made by an Israeli film maker Dror Moreh, ‘The Gatekeepers,’ six ex-Chiefs of Shin Bet, the Israeli internal security agency said that the occupation by Israel is taking them nowhere and that they may be winning the battle but were losing the war.  This is indeed a very damning assessment by its own security chiefs of the policy of cumulative deterrence.  Similarly, an article in The Jerusalem Post of 17 May 2021 was headlined, “Israel is winning battles, Hamas is winning the war” and stated that though the “military is registering great achievements… the house is collapsing from within”.  This alludes to the internal political discussion that this engagement has engineered in Israel.

The security situation that Israel finds itself in is indeed unique.  The politics of the region are so complicated that human suffering caused by actions of implementing a strategy of cumulative deterrence will only conceive violence in reciprocation.  The path to sustained peace is the one shown by the signatories at Westphalia in 1648 where the idea of supporting the ‘benefit, honour and advantage of the other’ is written into article one and brought an end to war in Europe.  Such a statesman like approach is the only way forward for achieving sustained peace in the Israeli-Palestinian conflict, 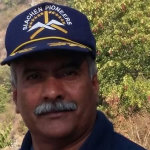 Air Vice Marshal Manmohan Bahadur, retired from the Indian Air Force after 36 years of distinguished service. He is an Experimental Test Pilot from the French Test Pilots School, a graduate of the Air Command and Staff College, USA and a post graduate in Defence and Strategic Studies from Madras University. He has commanded a frontline Helicopter Unit and two Flying Bases, was the Contingent Cdr of the first IAF United Nations Mission in Sudan and has been Head of Training (Air) at Defence Services Staff College, Wellington. As Asst Chief of Air Staff, the author was the operational head of Transport and Helicopter Operations of the Indian Air Force for two and a half years. His last assignment was as Asst Chief of Integrated Defence Staff in-charge of perspective planning and force structure of the Services.

On retirement in May 2013, AVM Bahadur joined the Centre for Air Power Studies, New Delhi where he was the Additional Director General. After eight very educative years at CAPS, the Air Marshal left the Centre to spend more time with his family, especially his grand kids! He continues to dabble in his core interests -- Air Power and Strategic Affairs by researching and writing in leading national newspapers and professional journals.

DSEI is White, Male, and Could Be Better