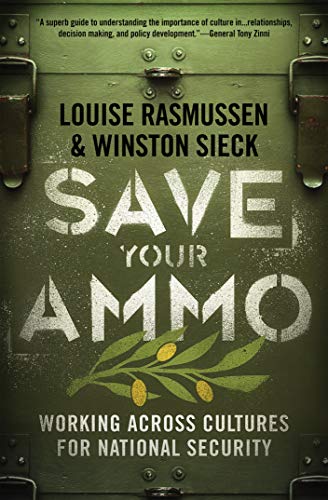 ‘Save your Ammo’ has been written as a one stop, go to guide for American military service personnel who will be working with and operating within foreign cultures.  The books sells the idea of “cultural competence” – 12 skills / principles, which combined together will allow the practitioner to successfully navigate a foreign culture.

The book itself is simply written, and seemingly aimed at American junior officers and enlisted personnel who have never served or travelled outside of the USA before.  The authors identify a secondary audience of military leaders who are trying to improve the way their staff live and work with members of other cultures

To a non-American reader, the book appears written for the lowest common denominator and for short attention spans.  Plenty of stories, anecdotes and parables are inserted to break up the competencies and lessons.  The beginning of each chapter has been written to draw the reader straight into the action – “If you’re going to move freakin’ three thousand pounds of C4, for the love of Christ, don’t use Yahoo Messenger…” That said, some of the stories told by the interviewed US service personnel are effectively evoked as scenarios to involve the reader – “picture this – you’ve been assigned as an advisor to a commander of an Afghan National Army Battalion.  After meeting the commander briefly in private, he shows you to a large room…”

The strength of the book comes from the experience of its interviewees.  There are some interesting insights and top tips which are drawn out.  For examples, pre-deployment reading of histories of the country written by locals rather than westerners.  As well as the importance of always consulting multiple cultural sources.  However, due to this reliance on an American interpretation of success, the book and lessons are one sided.  What could have added further value would have been interviewing foreign military personnel with experience of working with the Americans embedded alongside them.

The lessons and cultural competencies themselves progress within each chapter, from basic to somewhat more advanced concepts and strategies for working across cultures.  For example, chapter 2 begins by making it clear that foreigners do things differently due to differing backgrounds and cultures.  By the end of the chapter though, the lesson has been drawn out of the need to consider the history and culture of country, in order to reflect on how that may colour the view of American personnel.

In the final concluding chapter, the 12 cultural competencies are summarised in an even simpler single idea.  The authors explain that if something feels culturally wrong or alien to an American soldier, but it doesn’t compromise their mission, the advice is to live with it.  The question is then posed of what to do when going along with local culture compromises some part of the American mission.  In those situations, the authors’ advice is to consider pushing back (although the ideal is to look for compromises with win-win solutions), even if this degrades the American relationship with the foreigners.  “Sometimes local beliefs and practices compromise your mission.  In those situations, you can’t just play along. You do have to push back.”  Even if this risks coming across as rude or disrespectful.

Given America is a country built by immigrants from across the world, and is today a melting pot of so many different cultures, I found myself questioning why such a book has needed to be written.  It is startling to think that a country with such a truly global military footprint, and such hard and soft power, is so ignorant and poorly exposed to other cultures.  The authors do not explore why American service personnel feel such culture shock, or struggle when leaving the wire of their sprawling overseas bases and actually talking to locals.  I would have enjoyed some more critical analysis along these lines, that sought to not just educate first tour deployers, but understand why cultural interactions have proved difficult for at least some service personnel.

At the end of the book, despite its simplicity, some readers may be left with a number of unanswered questions.  Many cultural issues from current American operational deployments are conspicuous by their absence.  ‘Green on Blue’ attacks in Afghanistan, where Afghan soldiers have turned on their ISAF mentors, do not warrant a mention.  Despite the cultural frictions which have partly contributed towards their occurrence.  Also not mentioned is the widespread and prolific Afghan practice of Bacha Bazi, which some of the American service personnel interviewed must have mentioned.  The authors’ advice on how to deal with this and other predatory cultural practices that emerge in war torn societies would have been of use.

Also conspicuous by its absence is an explanation of the book’s title – ‘Save Your Ammo’.  The non-American reader is left guessing as to what ammunition.  Saved for what?  And what it would have otherwise been used for.