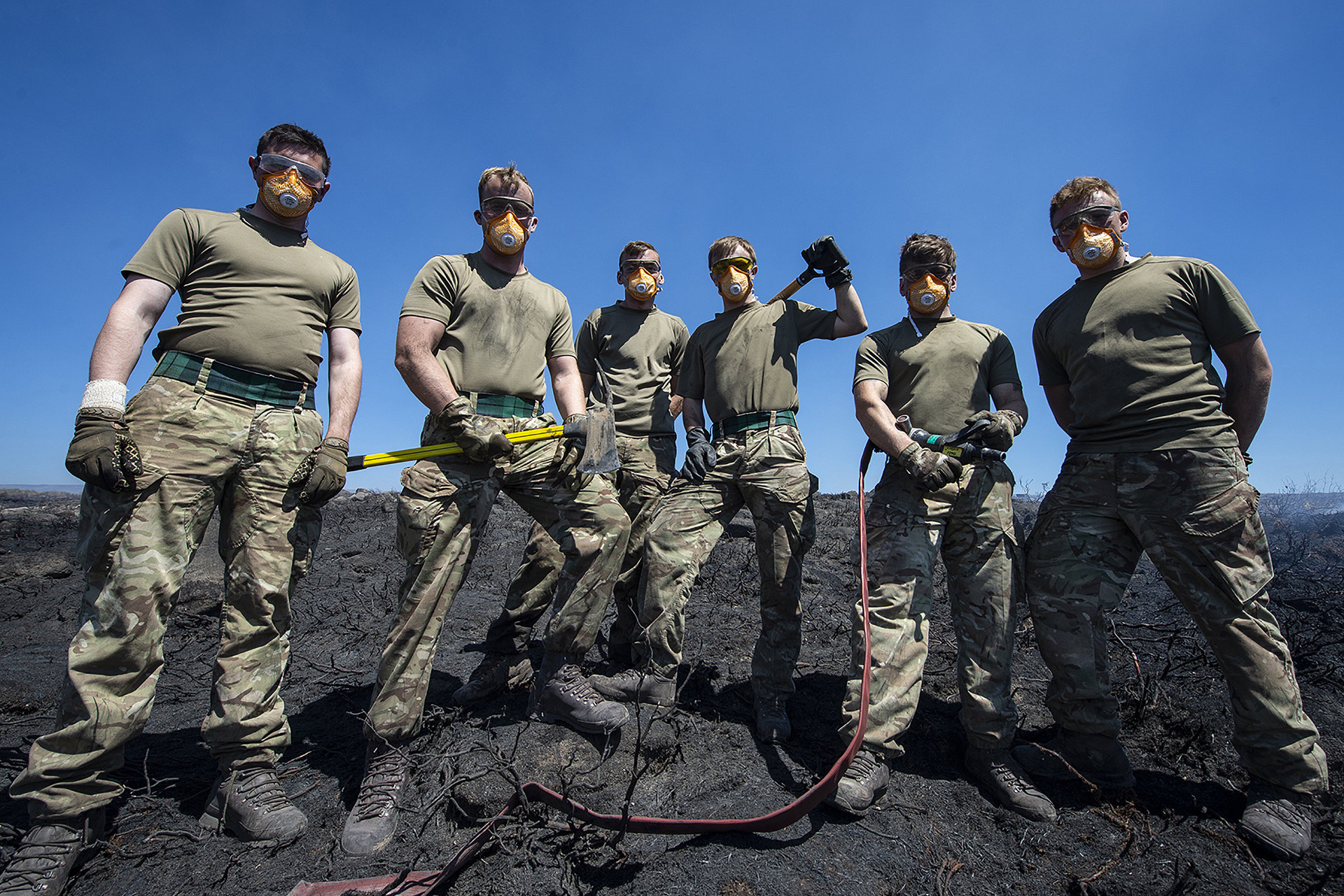 This opinion piece argues that Defence needs to re-assess their enduring view of military aid to the civil authority (MACA) tasks and conduct more training for them.  It presents the core argument that the baseline assumptions made about MACA, described in Joint Doctrine Publication (JDP) 02 (Operations in the UK), need further updating when judged against the political context.  Secondly, this paper argues that the broader UK resilience capability is in relative decline against the threats assessed in the national risk register.  This couples with the growing political and social demand for military support to mean that the UK writ large is highly likely to be unprepared for future resilience tasks.   Thirdly, it considers what training should be done and argues that Defence should align more broadly with the emergency services to prepare for future MACA tasks.

The Ministry of Defence needs to re-assess its stance to UK operations against the likely political context of the next 10 years.  The 2015 Strategic Defence and Security Review (SDSR) set ‘protect our people’ as national security objective one.1  There is a common belief that this means national resilience should be a higher priority for Defence, especially amongst high profile politicians such as Tom Tugendhat and Tobias Ellwood.  However, MOD 2019 plan only lists the contribution to national resilience as task 3 and the SDSR considers national deterrence more important.2  David Gilberton notes that the introduction of resilience into the national debate since 2001, climate change, and an evolving security environment has partly driven this difference between rhetoric and reality.3  However, a wider view of the context shows a growing demand for military involvement that is primarily driven by political considerations over practical ones.  Looking at it in these terms suggests Defence is arguably guilty of taking a position of doctrinal pureness, or planning against a set requirement, over the more political judgements which determine action.  Whilst Defence wishes to remain apolitical, this trend, and the demand for training it creates, should not be ignored.

JDP 02 sets out four criteria for MACA tasks but the doctrine has not been well adhered to in recent responses highlighting the need to update its understanding.4 For example the Defence response to COVID19 has been large, long term, and likely to endure into 2022.  JDP 02 establishes that MACA tasks should only be authorised if the civil sector has discounted all options, including private contractors.  In January 2021, 10 months into the COVID19 pandemic, politicians were still calling for greater military involvement.  This is despite there being sufficient time to develop private sector options or grow organic capability, thus undermining the principle.  Whilst it could be argued that the need was critical to saving life, you could also easily draw the conclusion that Defence has been politicised by this commitment when other options should have been developed.  Other recent large scale MACA tasks such as the commitment to BREXIT, or the 2012 Olympics, demonstrated a similar dependence on military assistance in a trend that is unlikely to change.  These events have been prioritised above overseas commitments that the military would likely consider more important.  Failure to be ready for this presents a reputational risk that could undermine political and public support for Defence.  This risk can be mitigated by conducting more training.  But it should also be seen as an opportunity to change the public narrative and perception of Defence underpinning broader communications.

The key point here is not that the military should not have assisted.  And in the case of COVID the role played by the military has been effective and welcome.  Rather, that the political context has changed since and Defence needs to re-appraise what training is conducted.  When JDP 02 was first written there was an assumption that military assistance was the last resort.  The 2017 version of JDP 02 acknowledges this saying that Defence is ‘increasingly’ seen as being a supporting component.5  Yet, beyond high level doctrine the ‘system’ has not pulled through this conclusion and little has changed with regards to readiness for MACA operations.

This deduction must be held against broader considerations of national resilience which suggests there will also be a greater need for military support.  The priorities established in SDSR15 are national and draw on resources beyond Defence.  Dr Rob Thornton and Dr Marina Miron identify that the UK’s resilience capacity has been ‘quietly atrophying’ and is, therefore, in relative decline compared to the threats.6  Whilst their analysis centres on CBRN decontamination the general thrust of the argument is correct.  Cuts to category one responders, as defined by the Civil Contingency Act, since 2010 have put organisations involved with national resilience ‘under pressure’.7  Although UK resilience capability in in decline, the 2019 national risk register shows that the threats remain.8  The register identifies that many risks are areas in which military mass or specialist skills would need to be utilised.  One example is animal disease.  Experience from the 2001 foot and mouth outbreak suggests that wide scale involvement would be needed again.  Similarly, flood responses now require near annual military support.

What should Defence do?

There is also an argument for continuing to take MACA tasks at risk.  The current system of collective and individual training has, arguably, been fit for purpose.  The current system of individual and collective training, especially the planning training delivered to Army stand-by battalions, could already be considered sufficient.  Given the wide range of potential tasks which cannot be trained against, Defence is arguably already well placed to respond when needed.  Equally, another view suggests that many stand-by resilience tasks are not retention positive and undermine the core purpose of Defence.9  As such, Defence could continue to take risk with readiness for MACA and accept the status quo.  Such arguments are, however, find their foundation in a tactical delivery mindset and do little to counter either the growing political demand or future need.

MACA training does not need to come at the expense of other Defence tasks or requirements.  There is a common belief that Defence either conducts training for ‘warfighting’ or ‘MACA’ but this is not true.  Nor is the presumption that ‘warfighting’ is more important.  The new Integrated Operating Concept, for example, prioritises engaging and constraining with ‘fighting’ only if necessary.10  Many resilience themes are common with overseas activity and Defence should find similarities; this would enhance both routine operations and meet growing demands for MACA.  For example, recent operations such as Op GRITROCK (response to Ebola) and in the Western Balkans demonstrate that many elements of MACA translate into overseas operations.  More broadly, large components of stabilisation doctrine emphasise the characteristics that mark MACA tasks.  Yet, conceptually the choice is still framed as ‘either/or’.  It is simply not the case.  Defence should find synergies to align existing training to potential UK demand and train more to prepare for them.

Finally, Defence should align its doctrinal thinking with the broader UK resilience network.  In 2013, the Pollock Review found that the lack of common methods, training, leadership, and systems degraded blue light responses to emergencies.11  Such issues are compounded when Defence contributes to resilience with a different set of reports and technology.  There is no suggestion that Defence moves entirely to civilian equipment, and we should note where Defence has unique needs for overseas operations.  Yet, there is likely to be areas in which Defence can find common ground and align with broader resilience organisations.  This work is already happening through the Joint Emergency Services Interoperability Principles (JESIP) work strand with some effect.12  Similarly, the emergency services can benefit from increased military experience and this would allow best practise to be shared nationally.  There is no logical reason that Defence shouldn’t join and align, where possible, doctrine and training to common standards.

This opinion piece has presented three core arguments.  Firstly, that there is a growing political demand for military involvement.  This is driven by a culture that demands action; whilst Defence should seek to remain distant from politics, it should not ignore political trends.  Secondly, that the risks the UK faces are likely to overwhelm the existing resilience network.  This is driven by funding cuts to category one responders which will not be fixed in the short to medium term.  Thirdly, that Defence should align doctrine and concepts with the emergency services to aide interoperability.  These deductions combine to show that Defence should conduct more training to prepare for future UK operations.