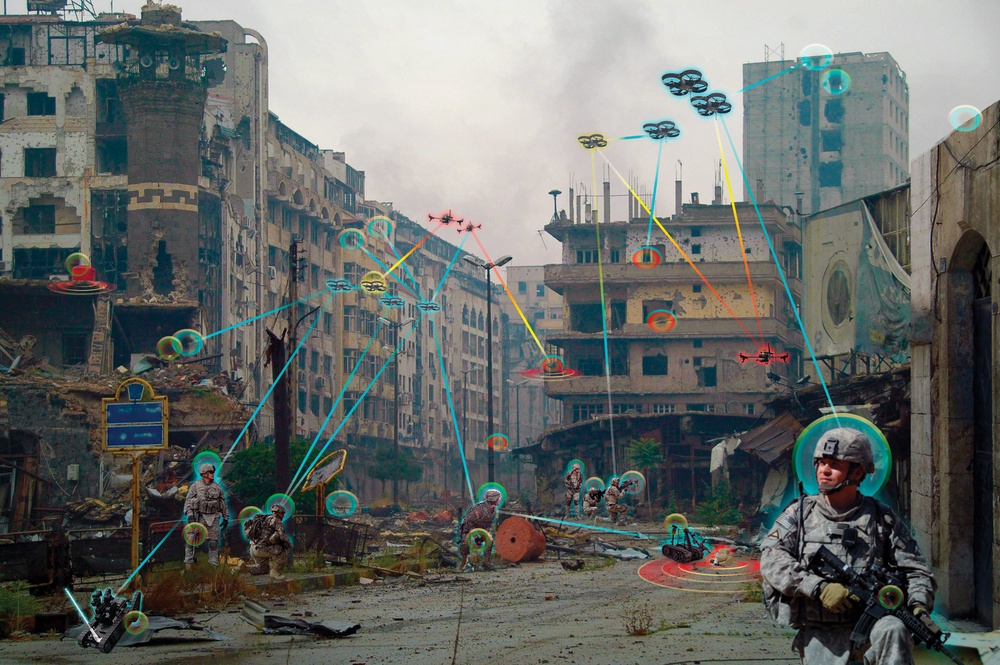 What happens when an alliance’s competitors quickly improve their technology and capabilities to place the alliance at increased risk? The North Atlantic Treaty Organization (NATO) addressed this dilemma during a recent summit in Brussels.  At the summit, the North Atlantic Council built upon NATO’s 2030 strategic outline and presented targets for increased technological collaboration to counter growing threats from Russia, China, and non-state actors. While NATO’s scientific and technical superiority has historically allowed it to outpace competitors, its adversaries are quickly closing the gap.

NATO members still hold advantages in their development of new technologies. According to the Global Innovation Index, seven of the top ten most innovative countries globally are part of NATO, while the other three are key NATO partners. Even so, NATO can do more to harness the alliance’s combined technological prowess to better compete and win in a future conflict. As China seeks to become the world’s innovation leader and Russia continues to undermine the alliance’s security, NATO will need to out-innovate its competitors and prepare for an uncertain future.

Four areas where NATO can focus on improving its competitive edge are developing its formal organizations, increasing public and private sector collaboration, harnessing and countering Emerging Disruptive Technologies (EDTs), and improving conventional military equipment. NATO must maintain its relative lead in technology sectors to defend its people and enhance its long-term strategic position. Improving science and technology (S&T) innovation will increase alliance collaboration, strengthen public and private sector cooperation, counter hybrid threats, deter adversaries, and harden defenses against attacks. NATO’s effectiveness in the future will heavily depend on its ability to maintain and improve its science and technology capabilities.

The global geopolitical situation has changed significantly over the past decade. Although NATO remains the world’s most successful and powerful alliance, China and other adversaries are quickly reducing NATO’s military and scientific advantages. In just the past year, China raised its defense budget by 6.8 percent and continues to build global power projection capabilities in addition to its regional defenses. As part of what some call a Fourth Industrial Revolution,Beijing is rapidly investing in AI, biotechnology, robotics, and other new technologies.

Over the past decade, NATO has recognized the need for increased innovation and technological advancements. In 2012, the alliance created the Science and Technology Organization, taking on the former roles of the NATO Research and Technology Organization, including its executive function. It also incorporated the former NATO Undersea Research Center, established the NATO Chief Scientist position, and outlined the unified governance of NATO S&T. In 2020, NATO created an Innovation Board and an Advisory Group on Emerging and Disruptive Technologies to provide external advice to NATO on optimizing its innovation efforts.

At the 2021 Brussels Summit, NATO agreed to launch a civil-military Defense Innovation Accelerator for the North Atlantic (DIANA) to “foster transatlantic cooperation on critical technologies, promote interoperability and harness civilian innovation by engaging with academia and the private sector, including start-ups.” There are plans to establish a NATO Innovation Fund (NIF), where allies “can support start-ups working on dual-use emerging and disruptive technologies in areas key to Allied security.” These are steps in the right direction, but NATO can do more.

In conjunction with its newest additions, the DIANA and NIF, NATO can expand the capacities of its Science and Technology Organization (STO) to boost research and development (R&D) in artificial intelligence (AI), missile and missile defense technology, space, cyber, and other EDTs. The STO is the world’s largest defense and security research forum, employing over 6,000 scientists from allied nations. However, the STO does not turn NATO defense spending into tangible products or equipment for the alliance.

NATO could use the STO to streamline research and product development, ensuring all allies are working toward a common goal and not spending resources on identical R&D. For instance, each country could allocate part of its defense budget to develop standardized systems like integrated air, missile, and cyber defenses. Whether using the STO or DIANA as its main innovation driver, NATO must continue developing its formal institutions to harness solutions that benefit the entire alliance and help it achieve its three core tasks of collective defense, crisis management, and cooperative security.

The Brussels Summit Communique also recommends continuing the R&D of AI technologies and identifying alliance gaps in this critical focus area. Many of these advancements occur in the private sector, and NATO must find ways to use those technologies for the alliance. The U.S. National Security Commission on Artificial Intelligence’s March 2021 report states that AI-enabled warfare is part of the near future. While the United States and NATO are currently ahead in these technologies, other countries will soon pass them unless they increase their R&D efforts.

In addition to boosting research through the STO and DIANA, NATO can streamline the acquisition of commercial sector AI-focused technologies for national security purposes and create an alliance-wide process that acquires emerging technologies from the private sector. The rapidly changing nature of emerging technologies and the quantity and depth of innovation seen in the private sector require an acquisitions system that is not only fast but allows for the rapid integration of updated product iterations and innovations. Autocratic competitors excel in private and public sector integration, given the nature of their systems. Improving its ability to apply privately developed technology for military uses rapidly will ensure that NATO retains its competitive edge over its predominantly autocratic adversaries.

While emerging and disruptive technologies (EDTs) touch all aspects of life and present exciting opportunities for the alliance, they also present threats. Many of NATO’s adversaries use EDTs against alliance personnel and infrastructure, such as recent cyberattacks targeting Polish politicians and the Colonial Pipeline. Enhancing its innovation processes will allow NATO to improve its military technology across all domains and boost its deterrence and defense capabilities. NATO could then better deter Russian and Chinese hybrid threats in cyber, space, electronic warfare, and information domains. For instance, NATO can use its forthcoming Cyber Command to take collective action and demonstrate cyberspace thresholds that will result in unified offensive cyber or conventional responses if crossed by its adversaries. By strengthening its cyber abilities and adding new capabilities, NATO can deter adversaries in the information space and take the offensive against them. NATO would then rob Russia and China of success in areas where they currently excel, and better protect the alliance’s people and infrastructure.

NATO can also use its technological advancements to improve its conventional military capabilities. One critical area where NATO must focus is its integrated air and missile defense. Russian nuclear weapons can reach anywhere in Europe and NATO cannot adequately defend against new technologies like swarm warfare or hypersonic missiles. Two of NATO’s high-visibility modernization programs focus on combating air and missile threats, but NATO must do more to combat emerging and future adversary weapons.

As the United States continues R&D on a Patriot missile system replacement, NATO countries could ingrate into its supply chain, like that of the F-35 aircraft, or develop complementary systems that fill gaps in the U.S. air defense system’s effectiveness. The current NATO Integrated Air and Missile Defense system uses mainly American-made radars and missiles stationed in NATO countries. While effective, NATO could harden its defenses by fielding European-developed systems that are compatible with current and future U.S. systems, thus expanding its anti-access area denial (A2/AD) bubble while simultaneously reducing air and missile threats. Furthermore, the alliance can conduct more combined military exercises to test new equipment and boost unit proficiency. Improving its deterrence and defenses in critical areas will reduce the military threats from NATO’s adversaries as they seek to sow division and destabilize the alliance. When it couples military advances with other areas of technological improvement, NATO gains the best chance of maintaining its competitive edge.

NATO will still need to overcome bureaucratic hurdles across its 30-member alliance. As Nicholas Nelson of the Center for European Policy Analysis (CEPA) notes, for the DIANA and NIF “to succeed, they must address authority and budget concerns, and then bring in the right personnel to lead and staff them.” Even so, NATO is taking the proper steps to improve its scientific and technological capabilities. Its strategic documents reflect the importance it is placing in these areas. By creating new institutions, NATO is setting the foundation for further development and expanded capabilities.

Given the threats that adversaries pose to the alliance, maintaining and improving its scientific and technological prowess will be vital to NATO’s future success. Strengthening these areas will boost military effectiveness, deterrence, and defense and enhance private and public cooperative advancements. It will ultimately give the alliance more strategic flexibility while improving NATO’s defenses in areas beyond the military, such as energy and cybersecurity in the private sector. By continuing to out-innovate its competitors, NATO will protect its people and infrastructure, and ensure that the alliance remains prepared to combat any challenges from Russia or China.

Justin Magula is an Army Strategist with four combat deployments, serving in the Strategic Landpower and Futures Group at the U.S. Army War College. He is a graduate of the Johns Hopkins University School of Advanced International Studies.

Paula Alvarez-Couceiro is a recent graduate of Strategic Studies at the Johns Hopkins University School of Advanced International Studies (SAIS).