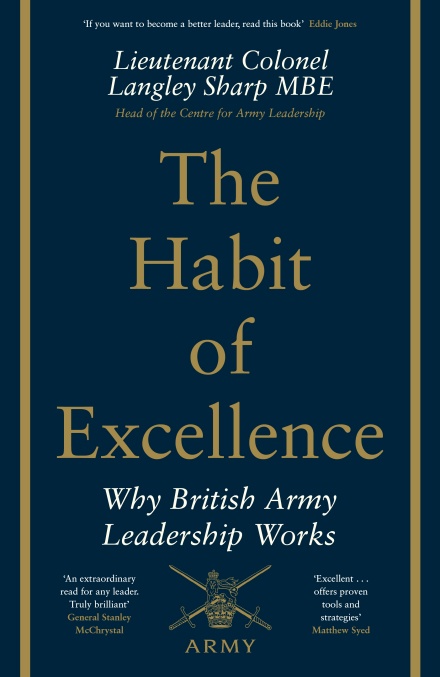 ‘The Habit of Excellence’ is the first significant book to come from the British Army’s Centre for Army Leadership.  The book’s intent is to give a reader an understanding of how a British Army leader thinks, and tell the story of Army leadership since 1660.  It is aimed at a general readership, from those already serving to civilians with no knowledge of Army leadership at all.

It’s early chapters establish a narrative of how leadership has developed and been shaped by conflict.  It then switches to explore Army Leadership Doctrine and has chapters focusing on each of its core elements: what leaders are, what leaders know, and what leaders do.  Later chapters look more specifically at the differences between officer and soldier leadership, between peace and war, and then looks to the future and the enduring qualities needed for success.

In many ways the book is flawed and provides only a shallow narrative of generalist leadership examples.  It uses academic evidence lightly and a reader will question if heroic stories are really the best that the British Army can produce.  And yet, for all its shortcomings, it’s an engaging and fantastic read.  ‘The Habit of Excellence’ provides an overview of Army leadership ‘lore’ and what a modern soldier believes a leader is.  It provides a snapshot of how the modern Army views itself, and the people meeting its objectives.

It is in the early chapters that a reader may become frustrated with the book.  In setting the context of how Army leadership has developed, Sharp presents a narrative history.  He highlights heroic examples of leaders through the centuries but this concentrates on ‘great men’ over the 99% average.  There is a focus on combat leadership, ignoring the wider evidence and deeper history that the Army can bring to this topic.  The narrative also lacks engagement with critical leadership thinking and how it has shaped Army leadership.  In picking out individual acts of leadership over 400 years, nothing actually shows that the Army has a habit of excellence, beyond its own self belief that one exists.

Sharp also develops two sub themes around the importance of mission command and how Army leadership ethos is underpinned by values and standards.  The evidence base for these assertions are little more than descriptions of individual acts of leadership.  The case for ethos is well made; be it corporate Army or that provided by the Regimental system.  Yet, the argument ignores significant evidence that mission command isn’t well applied by the Army, nor does it expand on the traits needed to make it successful.  Mission command is presented as a doctrinal theme over a bespoke style of leadership, potentially leaving a reader confused.  There are very few cases of leadership failure examined and you could easily think that the Army has only ever been excellent.  We know that this is not the case.

A lack of evidence

Taking these points one step further, the book also contains very limited critical analysis of ‘why’ Army leadership is as successful as Sharp claims.  Compared to, for example, the work of Dennis Tourish in ‘The Dark Side of Transformational Leadership’, the evidence base for ‘The Habit of Excellence’ is narrow and largely anecdotal.  The use of evidence from outside of defence is sparse and used uncritically.  The book feels academically lightweight.  In many ways it appears that external evidence is being used to confirm what the Centre for Army Leadership thinks is right, over what it has been able to identify.  In a book about leadership theory, the leadership theory is included almost as an afterthought.  This leaves a reader wondering if the Army understands its place in the wider literature.  You might even question exactly what the Army has been doing to develop leadership theory for the last four hundred years if this is the best it can produce.  This will frustrate anyone with an understanding of leadership theory beyond the very basics.  In this regard, Army theorists appear to be significantly behind civilian thinking, undermining any attempt to conceptually lead in this field.

A serving reader, both officer and soldier, is likely to recognise many of the case studies used in the book because they are the commonly used leadership examples from Army training.  In many ways, ‘The Habit of Excellence’ is a tour de force of how a modern Army leader understands leadership and the lore which has shaped them.  It doesn’t demonstrate much evidence of thinking outside the well trodden parts of Army history.  On the other hand, a civilian reader is likely to find this fascinating with many small details of heroism and courage placed in the context of leadership.  It would certainly help an outsider to the Army to understand how a military leader thinks about problems and their leadership responsibilities.

Arguably, these factors combine to suggest that modern Army thinking has a high level of cognitive dissonance and an enduring self belief that has little in relation to the evidence.  By focusing on the great leaders the writer forgets that most soldiers are normal leaders.  It is these leaders who carry forward the habit of excellence Sharp identifies, but average behaviours are not examined.

Another example of where the book falls short of explaining ‘why’ Army leadership works, or ‘how’ to do it, is in the later chapters covering officer and soldier leadership.  The officer leadership chapter explains the officer career model in detail.  Sharp defends the current system of courses and argues that they are essential in developing strategic leaders.  This is against a backdrop of many in the Army calling for reform (for example, Programme CASTLE) and external analysis by the Royal United Services Institute.  The book was released against a sustained flurry of negative evidence from the chaotic withdrawal from Afghanistan, the release of the Atherton Report into the lived experience of women in the military, and other events such as the leadership failures around the death of Baha Mousa in Iraq.  Other examples of failure can be seen in the fraudulent expense claims made by senior officers, to the examples of poor moral leadership highlighted online and in the press.  This fragility of the habit of excellence is not really engaged with throughout the text.

Sharp doesn’t shy away from these failures but tends to take a more positive and future focused direction.  For example, near the end of the book Sharp diverges from discussing pure leadership by merging broader themes of strategy and technology.  He attempts to identify how the enduring traits of Army leaders retain relevance in a modern context.  Is it true that a habit of excellence really follows an Army leader through their career?  The examples above suggest it does not and that the ethos may not be as strong as Sharp suggests.  Additional work to consider how this habit degrades over time, and what to do about it, would have added depth and analysis to the text.  That the Army isn’t considering this may worry some not in uniform.

For all this book’s faults, I absolutely loved it.  It accurately captures the ethos of the Army and the essence of how the modern Army seeks to lead.  Different leaders will take different key messages but the effect on a reader is likely to be the same.  As a leader, I finished it feeling energised about our role and the history that has shaped how many of us choose to lead today.

Similarly, Sharp argues that soldier leadership should be studied in its own right.  It’s right that the British Army examines this in more detail, as Sharp notes.  That a chapter is devoted to it when most leadership studies focus on senior officers or corporate leaders is a significant step forward.  The short examination of a soldier promoting and becoming a Lance Corporal is well developed.  The interaction between officers and soldiers is similarly engaging, looking at the relationship from both perspectives.  This chapter is arguably the strongest in the book offering clear and practical advice.

Sharp sets a firm case that leadership never ends and outlines the lifelong responsibilities that leaders may hold; “battles live with those who fought them throughout their military careers… and also for the rest of their life outside the Army”.  This is a sombre reminder of a moral duty that leaders hold which has not previously been well developed in current military leadership teaching.

‘The Habit of Excellence’ also looks at the interaction between leadership and followership.  Sharp makes a case that good leaders are also good followers, explaining why this is important.  An outsider looking at the military sees ranks and orders, ‘command’ being key.  Sharp shows that this is not the case.  Whilst he considers the role of ‘command’ it is clear that modern Army leadership is not dependent upon it and he highlights the nature of the relationships that leaders build and then depend on.  It is this explanation that adds the most value to a civilian reader.  This is well explored in his discussion about the paradox of the motto of the Royal Military Academy Sandhurst ‘Serve to Lead’.  As Sharp says, subtly, if you don’t understand that; you can never be a leader.  ‘The Habit of Excellence’ goes some way to help a reader understand what it really means.

‘The Habit of Excellence’ is flawed in many ways.  It will frustrate anyone with more than a basic knowledge of leadership or a critical mind looking to really understand ‘why’ things work.  And yet for all its faults, ‘The Habit of Excellence’ is an outstanding record of leadership lore.  It gives the reader a broad foundation to think about how the Army shapes leadership styles without being restrictive in its detail.  Reading it inspired me to think about how to be better, about how to follow others and learn from them.  I highly recommend this book to anyone, both serving and civilian, with an interest in leadership and how it shapes behaviours.