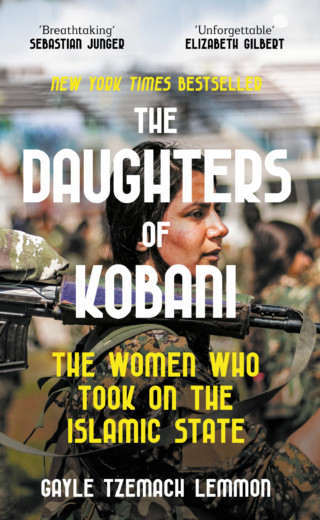 That’s it.  That’s the review!

‘The Daughters of Kobani’ tells the story of the women who formed up to fight Daesh as part of the YPJ (Women’s Protection Units).  The book is based on field research and reporting by Gayle Tzemach Lemmon and merges an intimate history of several female fighters in the YPJ with a wider analysis of combat and geopolitics.  It starts with the Kurdish defence of the strategic town of Kobani on the Syria/Turkish border.  The book covers how the anti-Daesh coalition took back control from Daesh and ends with the start of Turkish operations in Syria in 2019.

“Now that Kobani is free, what we want to tell the world is that women have played a great role in liberating this town”

In many ways ‘The Daughters of Kobani’  is a ‘coming of age’ book that many military readers are accustomed to.  It is a crowded field, given the numberless books stemming from military veterans of Afghanistan.  Yet, this text feels different in the way it mixes a personal narrative with its analysis of combat.  Its focus is also the women who fought Daesh.  It is both a piece of history and a tale of bravery and courage under fire; one that adds depth and context to modern debates around the war in Syria.

The text is filled with humorous moments when Western men meet the Kurdish fighting women for the first time.  In one incident a US special forces trainer considers whether co-educational training is appropriate; only for a female fighter to win the fitness test.  He declares that she has set the standard for the training against his expectations.  In another moment, a US commander meeting the YPJ fighters for the first time is asked by a 20 year old female veteran “how many Isis have you killed?”  The US operator is taken aback as his team-mate is trash talked by someone they never expected.  These moments tell us a lot about the mentality of western expectations.  They force a reader to question if they would have responded differently.  Or if we have biased assumptions baked into our mentality; do strategists rule out groups of females when considering what to do or who to support?.  This adds a new angle to the questions about women, peace, and security that are beginning to dominate modern Western thinking.

The enduring message of the book is how bravely and heroically the YPJ units fought.  The story of the defence of Kobani builds their determination to win.  For a military reader, it’s a clear demonstration of the value of the moral component of fighting power and a uniting purpose to combatants.  During the battles described, Daesh deliberately targeted their female opponents, calling them out on the radio and threatening to rape them if caught.  The book examines how the fighters dealt with this pressure; by staying cool and focusing on killing the enemy.  A warrior ethos that is very different to the Western mindset.

Following the undeniable bravery of the female fighters in defence, the switch to the Kurdish offensive is covered in the second half of the book.  The later battles around Manjib, and an offensive river crossing, show the levels of risk that the female fighters were prepared to take, driven by their hatred of Daesh.

It’s easy to believe that the author has taken their bravery and impact too far.  Diane Dark, for example, suggests that the book exaggerates or glamorises the impact of the YPJ.  Dark questions if the text is an attempt to put the YPJ at the vanguard of a feminist revolution.  It is certainly true that the book leaves the reader with the impression that the YPJ units were the decisive element of the land campaign.  But nowhere in the text does the writer seek to undermine the effect and contribution of others.  Nor does the text become a work of operational analysis, counting the numbers and displaying tactical maps to make her point.  The book is focused on the story of combat and what it meant for the female fighters she studied.  This doesn’t undermine the role of others, rather, it highlights the YPJ instead of more traditional narratives.

From the perspective of modern military leadership theory, there is also limited consideration of morale and fighting spirit.  In every example, the writer finds that the YPJ units have high morale and a willingness to face combat that seems absent when discussing other combat units.  Is this really the case, or has the book hidden leadership problems common across military operations?

‘The Daughters of Kobani’ does not entirely shy away from these questions.  The lead character of the book seemingly develops post traumatic stress disorder.  She routinely stops to think about comrades who have died in combat.  The narrative shows how the YPJ rotated fighters and limited risk by only committing the smallest number of fighters they could.  Her sense of duty is clear and explained in the context of the fight against Daesh.  The contrast between this approach and a western one (which seeks numerical advantage) is discussed in the text, but the YPJ have a clear logic in how to deal with combat fatigue.  When the YPJ celebrate victory there is a sense of emotional unravelling which binds success to the costs and victory and shows the enduring price that the YPJ suffered.  It feels honest, vulnerable, and genuine.  Themes that all combat veterans will instantly link to and that others will understand.

‘The Daughters of Kobani’ also merges history into this personal narrative.  It gives first hand accounts of the frustrations and successes of American support.  During the defence of Kobani, for example, it describes the elation when medical supplies are dropped into the city enabling the fight to continue.  The fragility of US support is present throughout the book, with the YPJ always conscious that it could stop at any moment.  Linking to the earlier criticism, you are left with the idea that if only a little more more support had been given the fight would have ended sooner.  This is probably not true and is arguably a narrow perspective to take.

It is also easy to sit back and consider the problem of Daesh from a map as a geo strategic one.  Much of the modern discussion focuses around maintaining the anti-Daesh coalition, keeping Turkey onside, and defeating Assad’s Syria.  The stories of those on the ground get lost in this deluge of analysis.  ‘The Daughters of Kobani’ takes a reader to the ground level of combat and demonstrates that things are more complex than many of these debates suggest.  Small levels of support can have a big impact.

The final strategic tension is one of ideology.  Many in the anti-Daesh coalition were concerned about supporting forces in Syria, because of the fear that they would later threaten the West.  The teaching of Abdullah Öcalan formed the centerpiece of the mentality of the YPJ.  Many Western readers would consider him a terrorist because of his links to the PKK (Kurdistan Workers’ Party).  His influence is clear throughout ‘The Daughters of Kobani’ and you will be forced to think about it differently.  During one celebration pictures of Öcalan were raised by the YPJ; the US then refused to take part in a press conference fearing the retribution of Turkey.  And yet, the text suggests that the US strategy in the region purposely supported organisations that followed his teachings because they were the only reliable ones.

‘The Daughters of Kobani’ is different to other books in this genre because of its focus on female soldiers.  A reader may just think that it’s another ‘coming of age book’ but with female characters; however, that does not do justice to the gripping and compelling stories presented.

Once I had started the book, I struggled to put it down.  The writing is engaging.  It develops a personal narrative and links characters together in combat.  It asks many questions about bravery, courage and leadership in a crisis.  Whilst these themes are not new, ‘The Daughters of Kobani’ offers answers from a new angle.  This against the backdrop of many modern military commentators arguing that women should not be allowed in direct combat.

The book merges this narrative with more engaged points about strategy and history.  I found myself questioning if the views I held throughout the campaign, from the comfort of my living room, actually stood up to the reality on the ground presented in the book.

I recommend this book as both a gripping and compelling read.  It is an important source that adds to the history of the anti-Daesh coalition; one that brings detail and colour to the story of the region and the women who shaped it.  It should not be ignored.