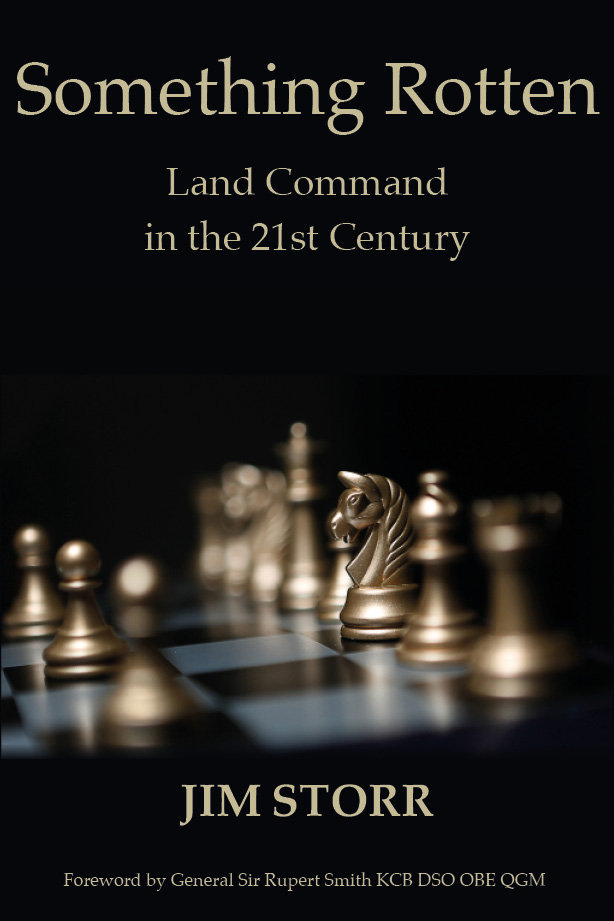 #WavellReviews “Something Rotten: Land Command in the 21st Century” by Jim Storr

Something Rotten has a simple argument:

Jim Storr’s latest book breaks down this statement looking at people, processes, and systems in forensic detail with his trademark cutting analysis.

To enormously oversimplify Storr’s work, Something Rotten asks staff officers to write less, more clearly, and to value outputs over processes.  He illustrates this with a mix of anecdotal stories and some evidence based analysis.  Something Rotten attacks the current ‘industry of orders’ and a modern military that appears not to think for itself.

It’s no surprise that we are fans of Jim Storr’s work.  We were most impressed by his last book, Battlegroup!,  Something Rotten is no exception.  We started reading the book wanting to like it.  We finished the book, loving it.  But that doesn’t mean we don’t have reservations about parts of his argument, and readers will find plenty to disagree with.

WavellRoom readers will recognise this book as part of the ongoing debate over what command and staff are for and how they should operate.  Jim Storr’s argument is the opposite of Anthony King’s position that more staff are needed for command and control because of the complexity of modern operations.

Storr doesn’t hold back in his critique of King.  Writing in the introduction Storr argues that “King’s main error, in my view, is to mistake ‘what is’ with ‘what should be’” before pointing out (without saying what they are) that there are 13 “simply wrong” errors in his text.  We were less than convinced by this dismissal of King.  For example, Storr cites Lawrence Freedman as dismissing King as “workmanlike”.  Yet, if you go to the source Freedman says ‘Anthony King’s book is the most substantial addition to the literature‘ since John Keegan, Martin Van Creveld, and Eliot Cohen’s seminal books on command.  This may be pedantic, and it would be easy to get distracted by this, but it sets the tone for Something Rotten as a full frontal attack.

Arguably the greatest problem with being so cutting, is that it opens a writer to blunt critique themselves.  Storr never reveals his sources, which means much of his argument is impossible to verify.  He also uses his personal experiences to illustrate his argument.  It’s not uncommon to see footnotes which contain his opinion as proof.  A more purist academic might suggest that an opinion is proof of nothing.  A reader could also spin Storr’s experiences and argue that he is just a frustrated former staff officer.

Some within the military community may consider Storr too blunt and not enjoy his writing style.  In an age of politeness and consensus, Something Rotten does not fit the expected mould.  It may explain why Storr seemingly has limited influence against the internal rot he argues against.

Ultimately, the lack of real military science and study (something Storr is also keen to highlight) means we are stuck with the sources we have.  We were prepared to take on trust that these experiences are accurately reflected in his writing; others may not be so forgiving.  Nonetheless, Storr’s views ring true against the things we read and our own collective experience.

One of Storr’s arguments is that commanders are no longer as involved as they should be in planning.  In making the case for this he critiques the British Seven Questions planning method.  This may be a surprise to a British reader given the role of the commander in ‘question two’ to define the mission and then directing the plans he wants the staff to develop.  This critique feels like the weakest line in Storr’s analysis.

Another area of Storr’s argument we had reservations about is his call for “naturalistic decision making”.  There’s more to this than a sentence, but in short Storr calls for commanders to use more instinct in planning to act faster.  Storr quotes and supports Gary Klein:

“experienced commanders, planning intuitively, do not refuse to compare courses of action.  They simply don’t have to”.

This is supported by his evidence of Cold War operations and other examples of headquarters coming to similar plans to their initial ideas.  This is illustrative of how Storr sees command and it challenges the logic of modern staff systems.  Modern staff training systems will (obviously) disagree.

Throughout Something Rotten, Storr makes the case that naturalistic decision making may not be as easy to  do today as it was in the past.  He identifies a waste of talent created by digitisation and new processes which often add no value to planning.  Simply put, military staffs are not as capable because they have too much pointless process, work in open plan command posts, and don’t think or decentralise power.  It would be easy to critique that as ‘harder in my day’, but it will read credibly to serving staff officers.

Storr also challenges other parts of the British planning process.  For example, he sees limited value in wargaming for tactical planning.1  It adds time and does little to help a commander make decisions.  To Storr, wargaming routinely only adds a few lines of coordinating instructions.  We spoke with a DSTL analyst who countered that these lines are often critical to success.  Wargaming was never part of the original seven questions process and this is evidence of an industry growing around staff planning that adds time and unneeded process when militaries need to move faster.

In Something Rotten, Storr continues his arguments about how militaries only change generationally, first published in Human Face of War.  Promotion is a hotly debated topic in most military circles and Storr’s argument will be a refreshing read for many readers.  He identifies two stereotypes of officers selected for promotion.  The first is the “pretty adjutant” and are tall, good looking, and being groomed for higher rank.  Critically, they lack regional accents.  The second belongs to “smart” regiments and attended private schools.  This chimes with arguments around ‘ducks pick ducks’, compounding problems identified elsewhere in the book.

When considering how staff officers are trained Storr is more critical:

“20 to 25 years of teaching defence studies at staff colleges has not produced a generation of officers who are curious about their profession”.

Instead, Storr argues, officers follow fads and the things which get them promoted.  Their purpose is misunderstood.

He calls for removing defence studies (defined loosely as humanities) from military education to focus more on staff skills.  This would focus officers on their core profession instead of interesting (but to Storr pointless) study.  Instead of defence studies, Storr recommends learning how to write efficiently, a move which would cut thousands of words from orders making the system less rotten.  If you’ve ever received an inch thick order, you may well agree.

The modern debate is polarised between two positions: that HQs need to be bigger to command more complex operations.  Or that they need to be smaller to act faster and be more survivable.  Storr is the most prominent voice for the latter.

The Science of Cyber and the Art of Deception