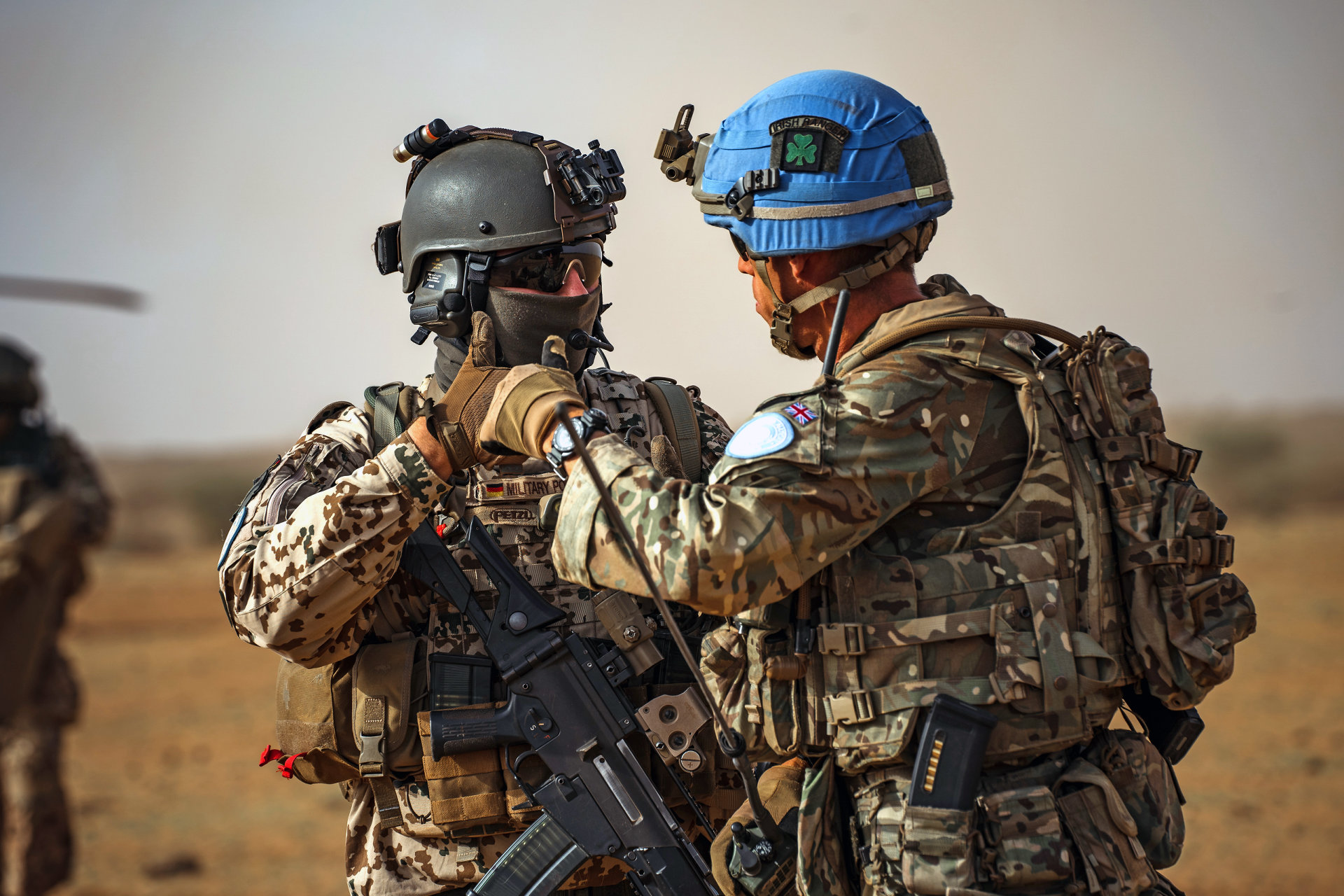 Two years ago for Wavell Room I wrote about why the United Kingdom’s deployments to Mali in support of the United Nation’s Mission there (MINUSMA) and France’s Operation Barkhane, were in the UK’s interests.  A great deal has happened since then, much of it bad.  Do I still think it a good idea for the UK to deploy to Mali?

In my original article, I wrote that British contributions to MINUSMA and the French war effort, though small, were valuable.  Moreover, both MINUSMA and Barkhane merited British support.  They at the very least helped prevent the cancer of jihadism from killing off Mali and further metastasizing throughout the region.  Burkina Faso and Niger were already stricken, and the “littoral” states along the Gulf of Guinea–Benin, Côte d’Ivoire, Ghana, and Togo– were at risk.  Sooner or later their demise would come back to haunt Britain.  Besides, being a good ally to France was an intrinsic good, especially post-Brexit, when the UK needed to reassure its most important European ally that it still cared European security, notwithstanding trade rows and their usual sniping.

Regrettably, the situation has evolved such that persisting with the MINUSMA mission is a losing proposition.  The mission cannot achieve its goals and there is little point in persisting, especially considering MINUSMA’s incredible cost both in terms of money and lives lost.  MINUSMA’s 2021 budget was over US $1.2 billion and since the mission began in 2013 at least 250 peacekeepers and UN personnel have lost their lives.  The options for Britain now are to work with its partners to steer MINUSMA in new directions, or to work with them to wind it down at the end of its current mandate, which the Security Council recently renewed for another year.  Both options have the added value of complementing French efforts, even if only indirectly, although the option remains to support Barkhane directly, now that it has decamped to Niger.  In either case, the UK can look for other ways to support countries in the Sahel and West Africa that promise a greater return on investment.  It can also explore working further with Mali on a bilateral basis; Bamako might be open to British help so long as it perceives no French hand.  The one thing London must not do is pull out precipitously, which would leave the other contingents in the lurch and perhaps precipitate more defections.  A rapid withdrawal would be a disaster.

A lot has changed in two years.  First, Mali has experienced two coups, which speaks volumes about the ability of Mali’s Government to tackle problems it must address to prevail against jihadist insurgents.  Mali’s populist military junta has turned on France, which saved the country in 2013 (Operation Serval) and had been fighting jihadists there since (Operation Barkhane),  in the name of sovereignty, demanding France’s departure.  It has chased out the Danes and seemed unconcerned by Germany’s decision to withdraw from the European Union Training Mission (EUTM), effectively ending it.  Mali also invited Russia’s notorious Wagner Group to help it.  Wagner personnel deployed in December 2021 and now number roughly 1,000.  They have been working closely with the Malian Army mostly in Central Mali.  Although, according to well-placed local sources, Wagner’s contribution especially of intelligence, thanks to its ISR capabilities, has helped Mali’s Army become more effective, that aid comes at a price more costly than the $10 million a month Bamako reportedly pays for Wagner’s services.  Wagner not only has committed human rights abuses but appears to have at least tacitly given some Malian commanders a green light act on their worst impulses and commit crimes of their own, namely killing civilians.  This pours fuel on the fire by encouraging radicalization and does little to bring security, especially as Malian forces lack the ability to hold territory they clear, protect the population, and govern.

Another important development is the resurgence of Islamic State in Mali, which French forces had been targeting since 2020.  It appears to be the case that France’s announcement in February that it was leaving the country signaled to the group that the time had come to marshal its strength and act more brazenly.  IS has gone from strength to strength in Gao and Ménaka regions.  Meanwhile, Al Qaeda-affiliated groups dominate elsewhere, especially in Central Mali, notwithstanding the heavy hand of the Malian Army and its Russian enablers.

In addition, the so-called Algiers peace process named for the 2015 Algiers Accord between Bamako and Northern Malian armed groups has gone nowhere. The junta appears even less interested in seeing it move forward than the previous government.  This is directly relevant to MINUSMA, as supporting political peace processes was always one of its primary objectives.  The fact that the implementation of the Accord is even less likely now than two years ago gravely weakens the argument for MINUSMA’s utility.

Lastly, there is a widening gap between the intentions of the United Nations Security Council and the Malian Government’s understanding of its interests and what MINUSMA should and should not be doing.  This gap was plain to see during the Security Council debates in June over extending MINUSMA’s mission. At the UN, Mali’s Foreign Minister, Abdoulaye Diop, voiced qualified support for the mission while making clear that what Malians wanted was an ally in the fight against insurgents, which is not MINUSMA’s mission. (It was Barkhane’s mission, but Mali has rejected its help). He also was hostile toward MINUSMA’s role investigating human rights abuses (which is part of MINUSMA’s mandate), and regards MINUSMA’s human rights investigative arm as an expression of an international conspiracy against Mali. Diop also categorically refused any French role in providing MINUSMA air support, knowing full well that MINUSMA relied on Barkhane to provide air support in cases of emergency, and that Germany, a major MINUSMA contributor, was anxious about its troops’ safety absent the French Air Force.  Unless another European country were to step forward and provide combat jets (something the UK could do), MINSUSMA will be even more dangerous than it already is.

In July 2022, Mali detained a contingent of soldiers from Ivory Coast that was going to relieve a supporting unit, and subsequently froze all MINUSMA troop rotations as well as sparking a diplomatic row with Ivory Coast Egypt announced its contingent would pause its activities, citing the danger but also Malian interference with UN air operations. At this rate, MINUSMA might unravel on its own before the end of the current mandate. It is hard not to conclude that this is the result Mali’s military junta seeks: It wants MINUSMA to end but, rather than saying so, has opted for a passive aggressive policy of making its operations more difficult while undermining the will of the countries that contribute to it.

In these circumstances, MINSUMA cannot fulfill its mission.  This is not to say that it has no value.  It provides some security as well as many jobs and important services that the Malian state cannot provide, .  Its disappearance almost certainly would leave a vacuum that would yield even greater insecurity as rival factions vie to fill it. The loss of MINUSMA also would undermine whatever progress has been made with respect to the Algiers Process: It is MINUSMA that sponsors and hosts meetings among the various factions and oversees joint efforts.  Mali’s government’s apparent hostility toward MINUSMA implies it does not place much value in its facilitating role. “Things will get worse,” however, is a weak argument for continuing so costly a mission.  Given Mali’s at-best luke-warm support for MINUSMA and its insistence on doing things on its own (with a little help from Russia), it might perhaps be time to take Bamako at its word and let it, even if that might mean digging its own grave.

One solution is to change MINUSMA, perhaps to alter its mandate and, along with it, its force structure.  That, however, would be easier said than done. Many contributing countries might not agree to participate in a more muscular and aggressive mission.  Britain, Germany, and others would have to accept, in effect, being at war.  That would be tough sell in the UK, and an impossible one in Germany.  There is, moreover, good reason to be skeptical about the success of such a mission especially after the failure of France’s Operation Barkhane.  Another option is to work toward winding MINUSMA down, to ensure that it would come to an orderly end that leaves no one in the lurch.  Ending MINUSMA should not, however, spell the end of western or British involvement in the area.  On the contrary, there is much Britain can and should do.

The most direct and urgently needed way would be to help Burkina Faso.  Burkina Faso is foundering, with jihadist insurgencies setting much of the country ablaze, and displacing roughly one out of every twenty civilians.  The humanitarian situation is dire.  The list of ways Britain can help Burkian Faso is long. Besides, the jihadism and violence in the country already have spread to the littorals, where they pose a growing threat.  Shoring up Burkina Faso helps them all.  The country, like Mali, also is ruled by a military junta, led by Lieutenant Colonel Paul-Henry Sandaogo Damiba.  However, unlike Mali’s junta, Damiba’s government is driven less by ideology and populism than by a search for r solutions for the countries acute problems. Damiba has no interest in picking fights with the West.  His hold on power is fragile because of the population’s impatience with the security situation.  They want to see improvements fast.  There is a movement trying to pressure him to break with France and reach out to Russia Wagner.  Russia, according to reports from credible sources, is conspiring with some to topple Damiba in favor of someone who would invite Wagner.  Damiba has his flaws, but if he falls, his replacement will almost certainly be even less capable of helping the country, and pro-Russian.  It is in both Burkina Faso and the West’s interest to help Damiba at least in the near term.

The same can be said for Niger, where British help would combine with help from America, Germany, France, and Italy, all of which have a military presence there.  Niger has a democratically elected government under considerable strain because of the security situation. It is perpetually at risk of a coup. Niger and the West benefit from seeing the country thrive. And then of course there are the littorals, who need help strengthening their defenses and identifying vulnerabilities. There is much Britain can do to help them. Democratic Ghana would be a worthy candidate for British security assistance.

There are obviously no guarantees that any British assistance will help, especially when ultimately peace and security are up to the countries of the Sahel and the littorals.  But continuing to support MINUSMA is a losing proposition.  As for why Britain should try, the answer remains what it always has been, which is that the situation is dire and will only get worse, and sooner or later, British and European interests will be affected.  The world is no longer what it once was, where what happens in Africa stays in Africa.  A peaceful and prosperous West Africa is in everyone’s interest.

Michael Shurkin is a former senior political scientist at the nonprofit, nonpartisan RAND Corporation.  He is currently an independent security analyst.