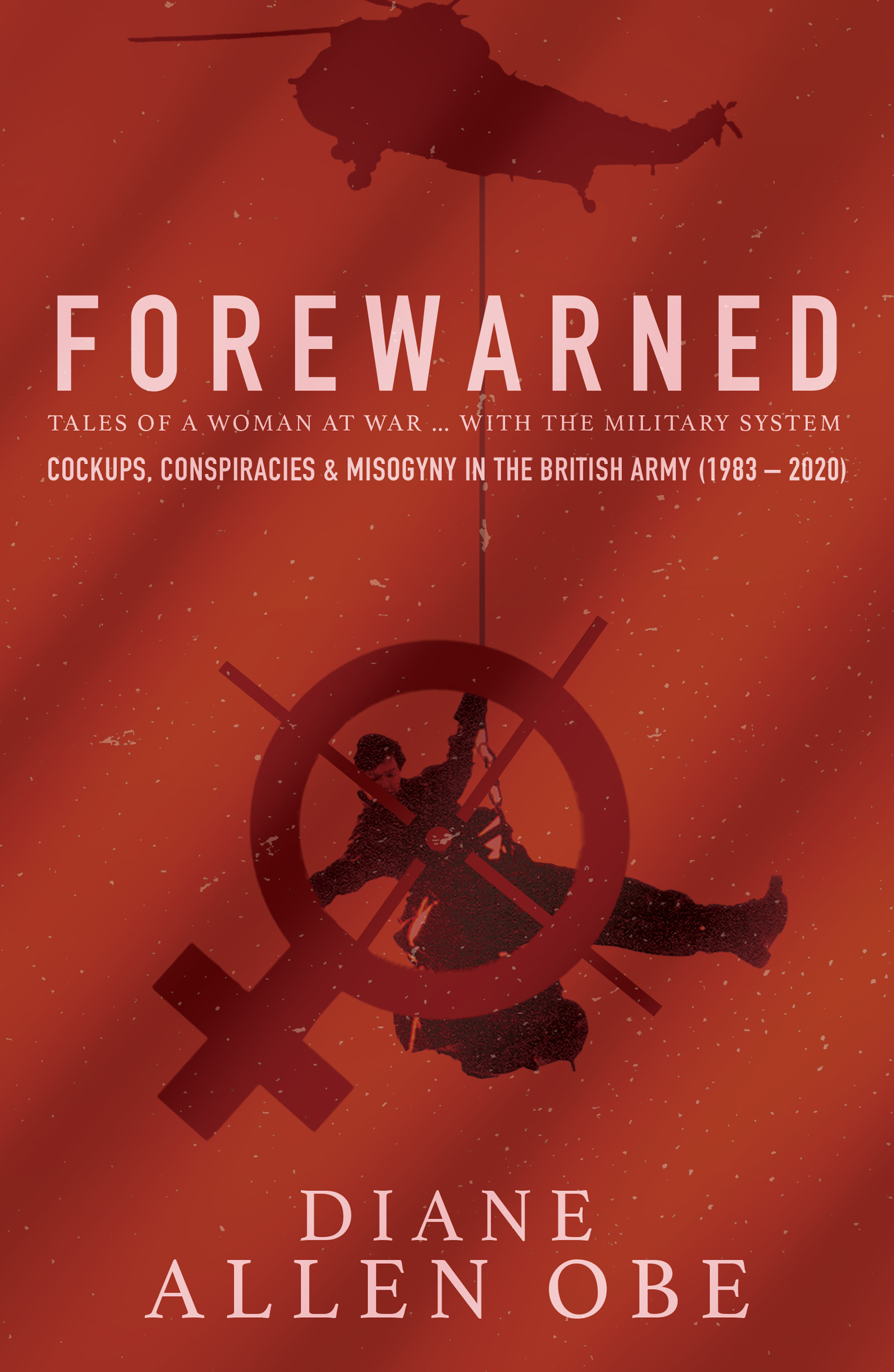 Forewarned begins with a statement which is both compelling and challenging:

‘Thinking of joining up and not middle class, white and male? You should read this first…’

It is a statement laden with controversy and frustration, whilst hinting to the tone and context of this book. On reflection, this is actually a book that should be read by those serving; I found it both fascinating and frustrating but also strangely compelling.

Written by Diane Allen, an officer who has served as both Regular and Reservist, the author articulates that her generation is not one defined by conflict but rather as one which has experienced significant structural and societal changes. This has led her to conclude, after a 30-year career, that ‘equality on paper is not equality in reality’ within the British Army.

As a young trail blazer in 1983, the author was in the first female cohort allowed to train at the Royal Military Academy Sandhurst and since then has seen the Army grapple with institutional change.  This is not just a book about sexism, it tries – frustratingly so at times – to cover off many societal and organisational issues which the author experienced during her service. There is a macro theme running through this book of bias, both organisational and individual, followed by sub-themes: how the Army has tried to integrate women, the frictions between Regulars and Reserves and the Army’s complaint system.

It is worth noting early on that the author lays out two serious allegations against the Army, these being:

The narratives of the book describe how and why, from a very personal perspective, the author has come to these conclusions.

For those who have served, many of the issues raised will be familiar, either directly or indirectly. The author outlines aspects of the overt and covert sexism that has been prevalent from her time in the Army. In many ways this first-person account is enlightening, noting that 90% of the Army is unlikely to have experienced the everyday frictions of working in an organisation that was not designed for, and has subsequently struggled to change and adapt to include them. It is easy to be dismissive of some of these arguments – the recent Twitter ‘debate’ about people in the Army who still answer the phone with ‘Good Morning Sir’ is an example of some of the entrenched views on these issues – but, continuing to raise these issues, even the ones which are all too often dismissed, are crucial to ensuring that the Army develops and become the organisation that our Senior leaders so often outline. One that is both inclusive and fair.

The author does an admirable job of exploring some of the other issues of bias across Defence. Whilst this is often displayed in personal examples, such as lack of success on promotion and jobs boards, the two issues that so often frustrate those who serve are evident; lack of transparency and an inability to manage expectations both being at the forefront of the argument. For those who have been in the military long enough to experience the inevitable knock back or unsuccessful jobs board, it is so often not the result itself that is the issue, but rather the lack of transparency or clarity that frustrates, which, whilst not explicated outlined by the author, are evident in her approach and frustrations. The Army has moved to re-assess how it manages its people’s careers, however, if Programme CASTLE is to be perceived as a success by those who serve, it will have to address the issues outlined in this book.

This book has no form of referencing.  Although this isn’t an immediate problem it does detract from it. Details that would aid understanding, such as the facts around the old and more recent service complaints system, are not included. These would have been helpful, noting a significant part of the book is focused on the authors frustration of the system itself. Furthermore, there are many comments which the author claims to have heard directly or indirectly, that are included in quotation marks with little or no explanation about the wider context.  Whilst I don’t have reason to doubt the author over the majority of the quotes, comments such as ‘I am told that a possible 50 percent of army officers are masons’ or that Regular soldiers are ‘often less agile of thought and less productive’ than their Reservist counterparts at best confuse, and at worse undermine the argument through lack of explanation.

To conclude, it is often challenging to review a book like this; one which is an opinion-based narrative. After all, who am I to judge how an individual felt or perceived a particular issue? However, all too often the challenges discussed in this book can be described as ‘faceless’ issues, which will divide and spilt opinion, and for that reason alone any book which encourages people to engage with the issue should be lauded. Suitable female representation particularly, is often seen as an issue within Defence that will be fixed by and with time, with the argument that it takes 20 years to grow a 1* officer being the standard response.  But, what if that isn’t the case? What, if in 10 or 20 years, the number of females both entering the Army, and achieving promotion are still comparatively low? You might not agree with everything this author says, or how it is presented, but you should engage in the debate and ask yourself if you are doing enough to address the variety of issues raised in this book.  This book is not a rant, rather it is a frank and honest view of one person’s battle within an organisation which is struggling to change. If you currently serve, have served, or just have an interest in this nation’s Army, then this will be an enlightening and hopefully challenging read.