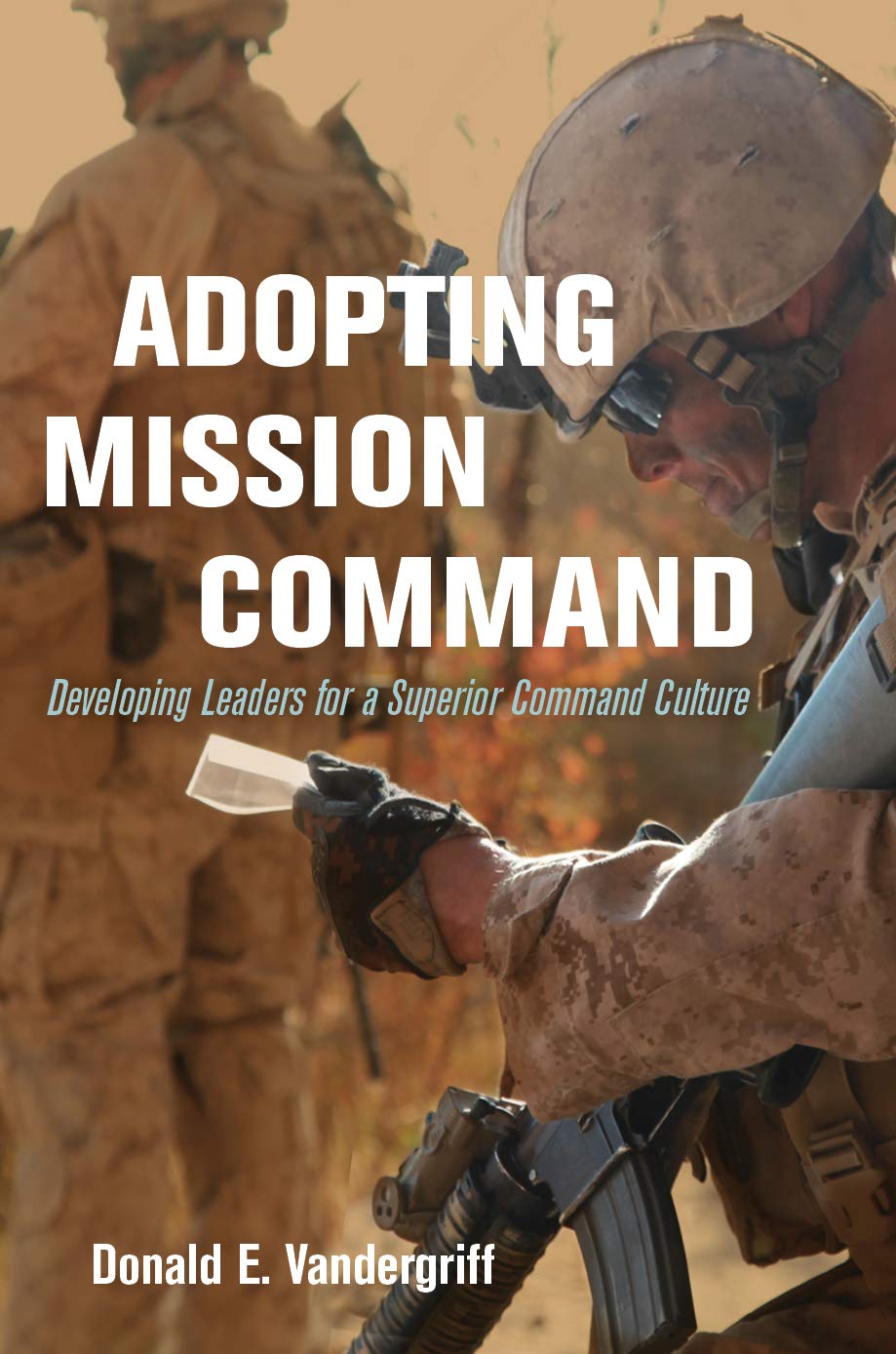 Available from the US Naval Institute Press.

Mission command is a doctrinal philosophy of centralised intent and de-centralised execution.  More commonly it is described as telling a subordinate commander ‘what to do and not how to do it’.  It is dependent on trust between a commander and their subordinate.  Military professionals favour it because it gives them freedom to make their own decisions to achieve defined objectives.  Like all doctrines it is hotly debated and many think that mission command has become a buzzword.  A doctrine discussed in abstract terms, whilst in reality commanders exert direct and close control over their subordinates.

In Adopting Mission Command former US Marine and Army Officer Donald Vandergriff explores Auftragstaktik (mission command) and argues that it is an essential element of modern operations.  He believes that even with modern command tools and intelligence systems, decision makers on the ground have the best situational awareness.

Firstly, what mission command is and why it’s needed.  His work argues that a mission command culture is essential for operational success.  Commanders and decision makers, therefore, need to be ‘intellectually and culturally’ equipped to deal with his view of ‘fourth generation warfare’.

Secondly, Vandergriff lays out a practical methodology for how to train it.  The book presents a model called Outcomes-Based Training and Education (OBT&E) and an Adaptive Course Model (ACM).  This model of training is designed to focus on outcomes over tick-box objectives. Vandergriff presents it as ‘putting a greater burden of professionalism on the shoulders of the student’.  Or, in simplistic terms, teaching a student how to think and rewarding them for doing it.  The reward applies even when they get it ‘wrong’ because the desired outcome is a military commander better able to think and decide.

What is Mission Command and why is it needed?

Vandergriff’s research is an engaging and interesting read.  He argues that mission command stemmed from Frederick the Great and the doctrine developed through the Prussian/German Army.  It was shaped by both success and defeat on the battlefield.  Yet, in outlining the history of the doctrine, Vandergriff has been critiqued for presenting a ‘quite selective’ view of its history.  The implication is that the intellectual underpinning of Vandergriff’s reasoning isn’t workable and that mission command isn’t as effective as suggested.

As a reader we must ask how much this matters in the context of his broader argument.  Vandergriff does not set out to present a piece of exhaustive history.  In 50 pages of analysis, a writer has no choice but to be ‘quite selective’ and there will always be examples of where it is not as effective.  Especially as he dedicates more space to look at how armies trained, as well as their operational history.

Rather, his argument is about what mission command is and how it might work best.  Indeed the final case study he uses, that of the US 4th Armoured Division in the Second World War, shows the real world application of the theoretical underpinning he presents.  In looking at this history, perhaps Vandergriff could have gone further and defined what mission command isn’t.

Vandergriff is also keen to explore why mission command isn’t already embedded in the US Army despite being written into doctrine.  He identifies ‘industrial age’ barriers to its adoption.  Mission command, in his analysis, remains as ‘rhetoric and countless buzzwords on PowerPoint slides’.

To oversimplify his argument, he presents the idea that a soldier is a piece of equipment in an assembly line.  He cites the work of the industrialist Frederick Taylor who broke down complex production lines into set tasks.  Workers were then trained only to do those tasks and to show no initiative beyond them.  He argues that this is how the US Army trains the soldiers of today.  He does not pull his punches when critiquing the ‘extensive bureaucratic systems’ built for state on state conventional war he finds prevalent in the US Army today.

Inside this argument there are natural links to modern leadership theories, for example theories of ‘red and blue’ thinking presented by David Marquet.  Vandergriff and Marquet find common ground in looking for leaders to understand and communicate intent based leadership.  Albeit, Marquet believes that the use of language is the underlying issue and is less concerned with structural problems.  In both models, however, subordinates and followers must have the confidence to know their leaders’ limits and fulfil it.

How to train It

Vandergriff presents a model of training called Outcomes-Based Training and Education (OBT&E) and an Adaptive Course Model (ACM).  In short this focuses on the results of training, rather than the current system of specific waypoints.  It overlays decision making theory onto military training and proposes a change of focus to favour outcomes rather than following processes.

A very simple example, filling a magazine, illustrates his theory.  The Army standard will ask a soldier to fill a magazine in x-seconds in a classroom and then considers them trained.  Yet, in battle the soldier will also need to think for themselves and consider multiple other variables.  The classroom objective bares little resemblance to the desired training outcome.  Vandergriff argues, in simplistic terms, that once the skill has been learnt, complexity and decision making should be layered in quickly.  Simply filling the magazine does not mean that the student should be considered trained because the desired outcome is a student able to fill a magazine and stay safe in combat.

That is a simplistic example.  However, the majority of Adopting Mission Command explores how this model can be applied across the spectrum of military training, from staff process to combat fitness.

The focus Vandergriff argues for is less on ticking boxes and more on the outcomes.  For example, the aim of tactical decision games is not always to win, but to test students’ decision making under pressure; “failure occurs when the cadet cannot make a decision… or if the cadet changes their decision under instructor pressure”.

The aim of this training model is to force trainees to think independently and make the decisions needed for success.  This builds on his conclusions in the first part of his book and the traits he identifies as needed for the successful application of mission command.

Arguably, his methodology is evolutionary, rather than revolutionary.  However, some reviews of Adopting Mission Command argue that there is a lack of empirical evidence to show this methodology working and that his case studies are too broad to be applicable.  The book offers limited comparisons with existing training systems and why this one is better.  Nevertheless, the multiple criticisms of his training methodology feel like conservative military resistance to change.  Has the level of evidence his critiques ask for ever been achieved when training field commanders?

To draw his themes together Vandergriff presents the case study of the 4th Armored Division under the command of Major General John Wood during the Second World War.  General Wood is presented as a maverick who utilised a combination of innovation, loyalty, and straight forward military boldness to experiment and build his division. In doing so, General Wood created a division which could exploit mission command by issuing faster orders to overwhelm an opponent’s decision making cycle.  The case is convincing.

That said, the division had three years prior to deployment to train together and managed to conduct multiple divisional field exercises.  Other factors such as control of the air and an overly centralised German Army might also have been critical.  However, the command tenets identified in General Wood are clear: he trusted his subordinates, gave the minimum direction needed, and was prepared to experiment to failure.  His subordinates were trained to have confidence in him as a leader and to trust his direction.  As a result, the Division achieved battlefield success.

Vandergriff presents an interesting and cutting analysis of the application of mission command.  His book lays out the historical theory behind the doctrine and its beginnings in the Prussian Army.  Tracking its development and comparing it to other armies offers the reader a different insight into a doctrine that dominates many contemporary discussions.

Regardless of whether you choose to adopt his training mentality, its presentation questions many of the accepted norms of training used today.  I was left with the question that if the current system is so good, then why have modern militaries struggled with implementing mission command?  Or perhaps, the US Army is already at the peak of the doctrine’s possible application.

The UK and Long-Range Strike