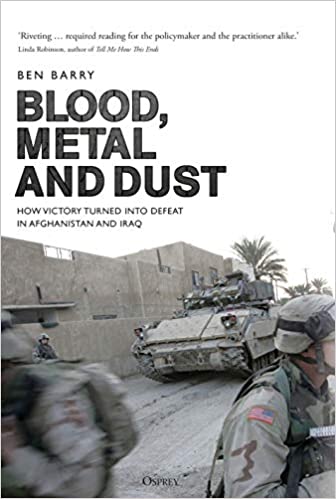 This is without doubt the best military history of the campaigns in Iraq and Afghanistan I have read to date.  To my knowledge, no single book has been ambitious enough to attempt to tackle both campaigns, side by side.  Yet this is required given how, despite geographical separation, both campaigns were intrinsically interlinked for both the UK and US.  It is accessible for those with military experience, (and therefore fluent in the language of doctrine and acronyms) as well as those with no previous knowledge of the subject.  Importantly the book is not a memoir, with a vested interest in legitimising involvement, decisions and deaths of soldiers under command.  Nor is it a scholarly account by an academic with no experience of the reality of war.  It is instead an impartial account, informed by the author’s own extensive military experience; written to draw out the lessons learned from the campaigns, as well as to assign blame for the strategic failures.  The minor criticisms levelled in this review are superficial to what is an important scholarly work, and are included only to provide balance.

Chapter 1, “Before the Fall” analyses the military experience of the US and UK before 9/11.  For me, this was one of the most revelatory chapters.  As a participant in both campaigns, I studied the histories and cultures of Iraq and Afghanistan in depth and ad nauseum.  In contrast no time at all was spent on the recent operational history and culture of the UK and US militaries.  The equipment, organisation and manouvre doctrine hangovers from the Cold War.  The hubris resulting from success against the Iraqi military in Kuwait in 1991.  The expectation that both conflicts would be peace-support operations like Kosovo.

Chapter 2 “Strategic shock and response – Afghanistan from 9/11 to Operation Anaconda” reads at times like a Special Operations Forces (SOF) wet dream of derring-do, but it draws out important details that would later affect both campaigns.  The author assigns blame to US Theatre Commander General Franks (and his decision to remotely command from Tampa and rely on Afghan proxies) for Al Qaeda (AQ) and Osama Bin Laden’s escape from Tora Bora.  It is interesting to ponder the counterfactual question of what the US commitment to Afghanistan would have been had the US troops of TF 58 at Kandahar airfield been permitted to provide an effective blocking force to interdict routes south from Tora Bora to Pakistan, sealing in Bin Laden.

Chapter 3 “Economy of Force: Stabilising Afghanistan” describes how the planned invasion of Iraq robbed the Afghan theatre of the resources to even maintain a country wide presence.  The author makes clear how this forced a reliance on predatory warlords and misguided SOF raids, which alienated much of the population and set up the Taliban’s return from its Pakistan strongholds.

Chapter 4 “Operation Cobra II: The invasion of Iraq” provides fascinating insights into the civilian micro-management of the invasion plans, 1 as well as its prosecution.

The aptly titled Chapter 5 “Descent into chaos” details the now well-known effects of a lack of planning for post conflict operations.  It also highlights the strategic mismatch and tension between those in Washington who advocated for immediately reducing troop numbers, and those within the Coalition Provisional Authority who were pushing ahead with rebuilding (badly) a broken state.  The author describes how:

“Coalition forces had insufficient strength to impose security but had sufficient troops to be seen as occupiers, an image reinforced by a lack of understanding, cultural insensitivity, civilian casualties and detentions.”2

Chapter 6 “As the Iraqis stand up we will stand down” and Chapter 7 “ Iraq surge: Regaining the initiative” both chart the remarkable US efforts to regain control.  Chapter 8 “Learning under fire” details the significant financial resource and willpower that was applied to the US military and Pentagon in order to adapt and change to do this.

Chapter 9 “The Battles for Basra” is one of the strongest chapters, with the author bringing his own involvement in the official lessons learned process for the British military campaign in Iraq to bear.  Throughout he is scathing about the strategic direction and resourcing of the British campaign.  “Strategy by spreadsheet” 3 was focused only on reducing British troop numbers and costs in an increasing domestically unpopular war.  The author does not pull punches in describing how the British Army effectively abandoned Basra to the control of Shia Militia groups, resulting in severe reputational loss with both Iraqis and the US military.

Chapter 10 “End game in Iraq: Success turns to failure” describes the withdrawal of US troops in 2011.  From the departure of the final US troops on p361, the reader is then given a breakneck catch up to the current day situation in Iraq by p363.  More detail would have been welcome on the US’s numerous contributions to the rise of Daesh, rather than simply assigning the full blame to Iraqi Prime Minister Maliki as the “midwife of ISIS” 4

Chapter 11 “The enemy gets a vote” details Afghanistan 2006-2009, with a notable emphasis on the British effort in Helmand Province.  The author’s understanding of the province is exceptionally accurate, and his criticisms brutally honest.  Chapter 12 “The Afghan surge 2009-2012” impressively and rightly provides some analysis of the logistical challenges faced, as well as the well-known battles in the south and east of the country.  Chapter 13 “The failure of the transition to afghan security leadership” provides a detailed description, year by year, of the slow increase of Taliban control, and the weaknesses which plagued the Afghan government and security forces.  Impressively this extends to the current day situation of military stalemate.

Chapter 14/15 appropriately titled “Bloody Lessons” is the book’s strongest.  This could and should be required reading for military professionals as a stand-alone excerpt.  It contains broad strategic thinking on the outcomes and effects of both campaigns.  As well as on war, strategy, and the future use of force.

The book reads like a blend of military history, scholarly dissertation and an official military lesson learned document.  The excellent ‘audit of war’ paragraphs at the end of each chapter keep the book focused, providing precise summaries and lessons learned.  Given the author’s involvement in the lessons learned process for the British army’s Iraq campaign, I was expecting the book to be weighted in content.  However, the understanding of the Afghanistan campaign, particularly the Helmand operating environment, was spot on.  I was particularly taken by the author’s description of the Afghanistan conflict, not as an insurgency between the Taliban and the Afghan government, but:

“in reality, a complex and multifaceted civil war.  Local tribes, drug gangs, criminal networks, warlords, politicians… all sought to promote their interests by aligning with external actors including the US, NATO.” 5

The author’s fondness for armour comes through in the writing, particularly descriptions of the ‘Thunder Runs’ in Baghdad in 2003 6.  Personally, however, I would disagree that tanks were required in the UK’s counterinsurgency campaign in Helmand 7.  Whilst true they were the only protected mobility vehicles available at the time, they are of questionable utility for a war amongst and for the people.

The military rockstars of the campaign – notably Mattis and McChrystal – get starring roles and lengthy quotations of their writings.  Given the author’s previous rank and access, I was expecting more primary source interviews with some of the key operational / strategic actors.  One of the book’s strengths for me, was its willingness to directly assign blame for strategic failures.  Nevertheless, I would have liked more explicit criticism of named senior military officers, particularly at the operational level, rather than just focussing on senior civilians and politicians.

I’m also unsure I agree with some of the author’s conclusions in the final chapter;  specifically, the lessons about combined arms manoeuvre warfare doctrine 8.  From my reading of the book, success in the 2003 invasion stemmed in large part from Iraqi weaknesses (most Iraqi units ‘self-demobilising’ rather than fighting) not because of western speed, training and technological superiority.  Indeed, it could be argued that in both countries the enemy was never truly defeated on the battlefield.  In Afghanistan AQ largely retreated across the border into Pakistan; in the Iraqi the Sunnis shed their uniforms to prepare for the insurgency.

I would also have liked to see more on lessons learned about urban warfare, at both the tactical and operational levels.  Particularly given the two battles for Fallujah, the battles for control of Baghdad, and subsequent campaign to push Daesh out of Mosul etc.  A lesson I took away after reading the book, is about the need to partner with effective proxy forces.  I would question whether the political and legal risk appetite would exist to work with the forces of malign ‘Northern Alliance’ warlords today, as US SOF did in 2001.  Subsequent failures in both campaigns could be framed in part because of the weaknesses of the western coalition-built proxy forces.  The Shia loyalist dominated Iraqi Army that almost collapsed in 2014 against ISIS; the Afghan National Army with its corruption and deteriorating operational performance; the Afghan National Police “as much a part of the security problem as of the solution, with endemic corruption and human rights abuses.” 9

The conflict in Afghanistan continues today, as does western counter-Daesh activity in Iraq.  The book is vital in understanding these current campaigns.  Rather than cutting off when large scale US /UK deployments ended, the author catches the reader up to the current situation as at publication.  The analysis is evidenced, succinct and accurate.  Research is extensive and widely gathered.  His understanding of all of the actors, western, host nation and insurgent are spot-on, for both theatres.  I was impressed with the author’s dispassionate approach which gives credit to the bravery and adaption of the insurgents as well as western forces 10.  This book should be essential reading for UK and US military professionals, most importantly for senior decision makers, to ensure that the lessons from 20 years of conflict have been learned.  So that the massive expenditure of ‘Blood, Metal and Dust’ has not been in vain.