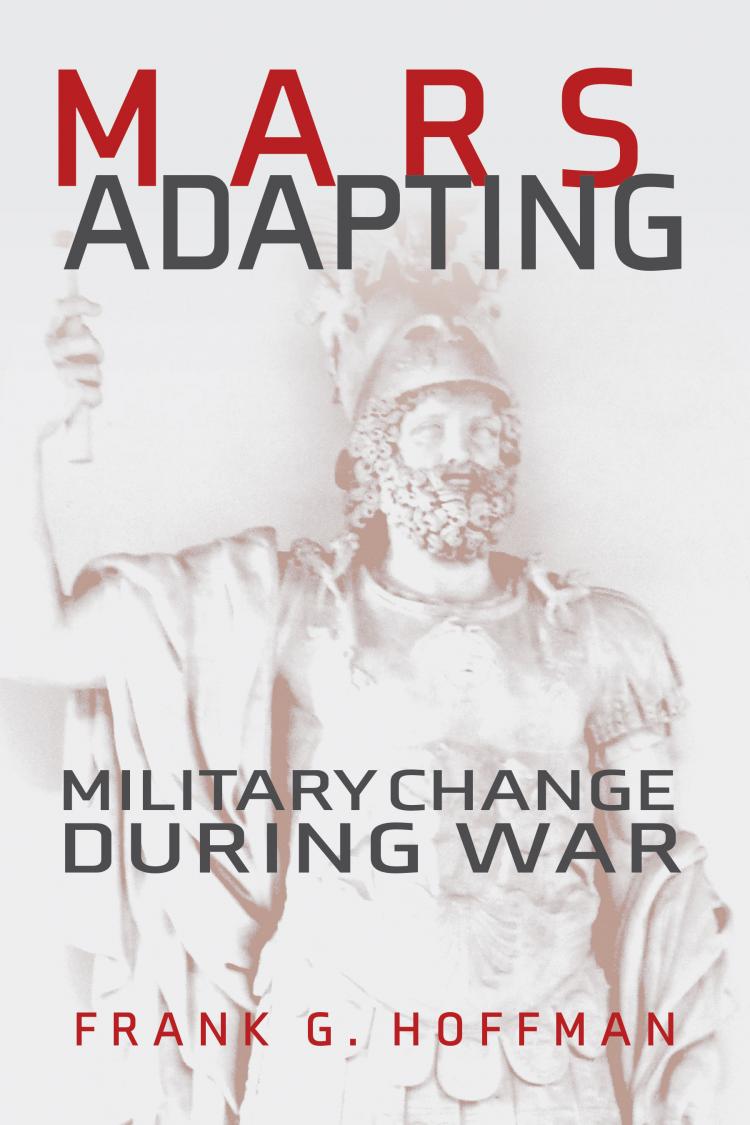 Mars Adapting focuses on how armed forces change in war.  It looks beyond the normal realm of military writing to examine Organisation Learning Theory from business literature.  This offers a contrast to the books that most military professionals will read, using a different frame of reference.  The writer, Frank Hoffman, is a former US Marine Corps officer, and uses a mix of his research and professional career to explore the subject.

Hoffman uses case studies from the US Navy, Army, Air Force, and Marine Corps covering WW2, Korea, Vietnam, and Iraq.  He selected prolonged campaigns covering multiple doctrinal, political, and technological changes to give a broad feel for his central argument.

The bottom line of this review is that we enjoyed Hoffman’s broad and cross disciplinary approach to studying evolution in combat.  It is refreshing to read analysis that challenges our standard military conceptual frameworks.  But we are concerned about how he has applied the academia he has selected, and feel that the second order considerations are missed in a book that amounts to a more narrative history.

State of the literature

Hoffman’s first two chapters lay out the scholarly literature on military adaptation.  Hoffman points out that, until “fairly recently”, much writing about military evolution has focused on a few key events, such as disruptive technology.  He finds that there is limited writing about how armed forces change in war, and is particularly surprised given the recent historical context of campaigns in Iraq and Afghanistan.  Looking at cross-discipline literature, Hoffman argues that even the security studies community have failed to explore wartime innovation, whilst historians have focused on change in peacetime.  It’s this gap that he aims to fill with Mars Adapting.

This critique, the gap, is perhaps unfair to much of the internal literature generated by military communities, but most of it falls short of peer reviewed quality.  And there is writing that already attempts to fill this gap, albeit with different frames of reference.  For example, Adaption Under Fire (and the sources it draws on) suggests that more has been written than Hoffman allows for.  Yet his point about a lack of serious study of how to change in war is one which should worry those with military interests.  Whilst literature may exist, it is arguably more shallow than the scope of Mars Adapting and this is demonstrated in the breadth of his literature review.  In presenting a broad approach, including business and social literature, Hoffman forces a reader to think differently about problems and breaks the military reader from their conceptual cage.

The core argument of Mars Adapting is that Organisational Learning Theory is valuable in understanding adaptation and innovation.  Hoffman presents the theory with four interlocking elements: leadership, culture, a structured learning approach, and effective dissemination of products.  Each case study he presents offers a narrative of the conflict and then analytical sections structured around these four points.  Hoffman draws conclusions on each before combining them into a broader argument with short conclusions.

Organisation learning theories trace their origins to the 1960s.  They are not new, so it is surprising that few other military writers have used them before.  A military reader may question why.  Depending on your perspective, this is either a strength or a weakness.  Hoffman would argue that the military literature to date is narrow because of a focus on purely military ideas.  In many ways, Hoffman’s cross discipline approach mirrors the cutting edge of military writing.  Take, for example, Professor Anthony King’s book Urban Warfare; a sociologist without a military background, King’s contrasting perspective adds greatly to a practitioner’s understanding.

Mars Adapting makes a similar contribution.  Hoffman lays out arguments for and against how organisations change.  His early chapters are refreshing and easy to follow.  We started his argument understanding his perspective and how it stems from the evidence he presents.  But it is after this that we begin to question the depth of his analysis.

One of the many frustrations with books of this genre is distinguishing between doctrine, technology, and every other aspect of how militaries evolve.  You can start this book wanting to learn about how soldiers evolve in combat, but spend pages reading about the development of technology outside the theatre.  In his chapters about the US Air Force in Korea, for example, Hoffman details the development of gun sights and the utility of different aircraft.  Pages are spent on torpedoes.  Arguably, the selection and development of equipment is organisational learning in combat, offering a higher view of what is needed for success in combat.

Hoffman’s analysis feels lightweight in other parts.  In each section he expended lots of words narrating the combat that occurred.  It’s obvious, to Hoffman, that some aspects give one side a clear advantage, this offers limited analysis of organisational learning.  His language is often casual, with effects described as obvious or predictable.  Yet, such statements do not really stand scrutiny against the wider historiography of these conflicts.  Contrast Hoffman’s style to Professor Jim Storr, for example.  Storr uses more primary evidence and challenges assumptions in a way that Hoffman’s more theoretical and narrative analysis does not.  Hoffman also struggles to evidence the academic framework presented in the opening chapters of the book.  Whilst this is not wholly undermining of his core argument, Mars Adapting loses its precision in the stories Hoffman tells of each conflict.

Limits of the argument

One of the traits of Hoffman’s writing is his willingness to present the extremes of the debate.  For example, the US Army in Vietnam clearly failed to learn.  Yet Hoffman also finds evidence of “excellent” dissemination of reporting and analysis, and draws positive conclusions about other elements of the learning cycle.  While there is room for nuance, this can be confusing, and it  sometimes feels like some of the arguments have been overly simplified.

Firstly, the need to educate senior officers to understand how operational performance is tied to collaborative command climates.  This is easier said than done, and his calls for “more education” feel flat in an already competitive market of military education.  The readers is left wondering what exact education Hoffman is calling for?  The lack of a more detailed recommendation is disappointing from a soldier scholar like Hoffman.  This feels more like a cultural recommendation, rather than an educational one.

Secondly, cultural flexibility is needed over compliance.  Hoffman argues that commanders need to be ‘educated’ in creating supportive cultures.  (As a side note, to a British reader, this may resonate if a recent response to being challenged by the British Army’s Land Warfare Centre is anything to go by).  Yet this recommendation feels very similar to his first, and arguments about the need for a learning culture in western militaries are already common in the existing literature.

Thirdly, the need for feedback mechanisms.  Hoffman calls for a standardised process to do this.  For the British military this would be learning accounts or incident investigations, and he does detail some of the American examples in the book.  Yet, the second order implications of this recommendation aren’t drawn by Hoffman.  What would he recommend?  How would we collect data?  This is where Mars Adapt falls short of the higher level of scrutiny and evidence found in the study of warfare and across social science.

Fourthly, that dissemination is the key enabler.  Hoffman calls for ‘rigorous validation’ over ‘warehousing new information’.  Yet, without a clearer recommendation of exactly what information, Hoffman’s argument falls short of having real utility.

We applaud Hoffman’s approach.  We agree entirely with the need to be cross disciplinary.  Mars Adapting is a good example of a military professional trying to do so.  Hoffman’s understanding of the literature is impressive.  However, we don’t feel that the second and third order implications of the analysis are drawn out in Mars Adapting.  The book overly focuses on its narrative of combat, without presenting killer conclusions.

As such the book is a good primer to explore learning in the US military case studies used.  It is most useful to an American military reader given its focus on their armed forces.

The clearest conclusion Hoffman draws is that  “without formal learning and dissemination mechanisms, institutional adaptation is slow and constantly recurring”.  This is a frustration that will be common to many military professionals.  A scan of military journals will find that we learn, and relearn, the same lessons again and again.

Readers should be aware of the book’s limits.  We found ourselves using the framework and examples to interpret our own experiences of British military adaptation; but like Hoffman we were left searching for answers in Organisational Learning Theory.