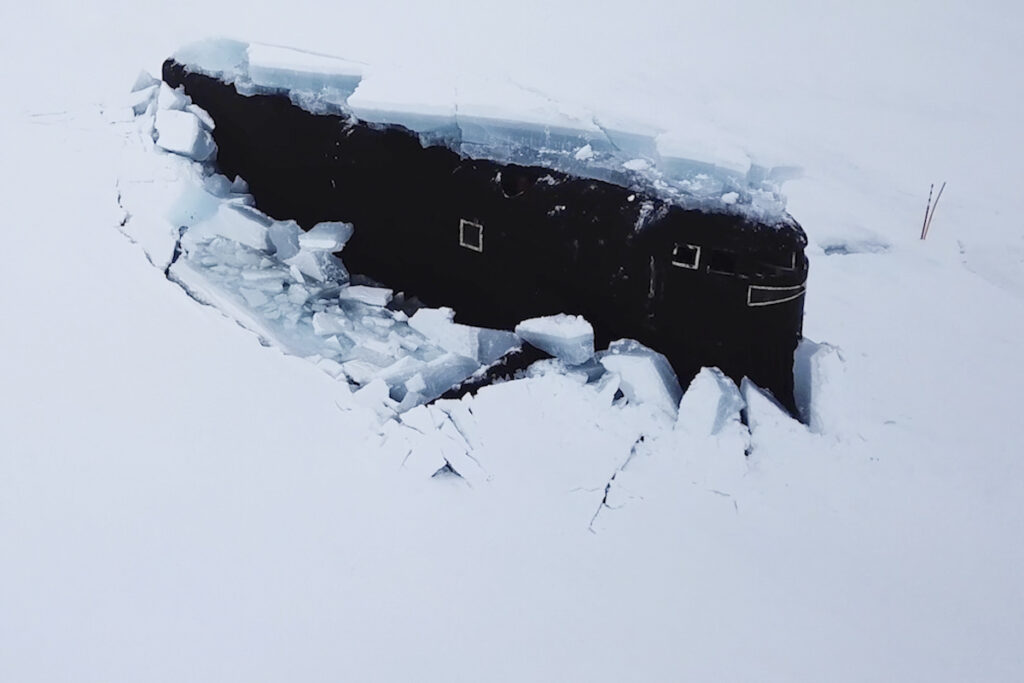 On the 6th August 2022, just a few months after the high-profile sinking of the Russian warship Moskva during the ongoing Ukraine conflict, an updated version of Russian Maritime Doctrine (RMD) was published. Very helpfully, the Center for Arctic Security and Resilience (part of the University of Alaska) have gone out of their way to create an English translation of the document, that can be downloaded for free HERE. The translators have kept the original formatting which makes it a challenging read; our military readers should never curse the merits of JSP 101 again!

What follows is not a deep dive into RMD – there are far more credible experts out there than I – however it does, I hope, provide a useful ‘broad brush’ primer on what the Russian State currently see as their maritime priorities.

Unsurprisingly, the update to RMD focuses on the three core principles of Sovereignty, territorial integrity and security. However unlike its British Maritime Doctrine (BMD) counterpart it places much more emphasis on Russian national maritime potential, collating and incorporating elements that in the UK have been siphoned off and included in the National Security Strategy, National Shipbuilding Strategy, etc. There is, therefore, a strong thread throughout relating to the importance of developing both facilities and means of exploitation, production and transportation of marine hydrocarbons, mineral resources and other materials. “The development of the Russian Federation as a great maritime power” is number 1 on their list of strategic objectives.

RMD identifies similar strategic threats to BMD: the overall importance of the ocean, migration, climate change and resource competition. Terrorism is mentioned, but is given a much reduced emphasis throughout the document. The particular Russian mindset is put to paper in Section II, para 22 (2)-(9) 1. This more or less denounces US attempts at “dominance” of the oceans,  pointing a finger at the nefarious way in which US allies are ganging up to squeeze the Federation’s access to, or through, key waterways, etc.

Crucially, this part of RMD also sets out clearly their plans for the full economic and military development of the Arctic Zone of the Russian Federation, emphasising its strategic potential as both a military and resource base. Importantly, it states that their aspiration encompasses the full continental shelf out beyond the 200nm EEZ. The development and exploitation of the Northern Sea Route is also specifically mentioned. Both of these aspects will see increased activity, development and friction in the region as other nations also seek to reinforce or extend their existing claims in the Arctic. International cooperation and multinational maritime activity is mentioned but appears almost a token throw-away: this is very much a ‘Russia first’ document.

The 5 areas/activities 2 picked out for development are:

The first 4 are gone into at length, and show a fascinating insight into the economic drivers of Russian maritime policy. Significant weight is given to port and general infrastructure; the total renewal and expansion of Russian fishing fleets; investment in ‘Specialized Fleets’ (ice breakers, research & survey ships, exploitation platforms, etc); the development of scientific outposts and capability to better understand & predict climate change activity. ‘Naval activities’ receives just two sentences: that they will be carried out in accordance with state policy and prevent aggression against the Federation.

Detailed regional goals and activity are covered on pp.19-29, with the main focus being the Arctic and Pacific. The Atlantic section also scoops up the likes of the Black Sea, Caspian Sea, Mediterranean, etc and there is a small section on the Antarctic. Again, the doctrine emphasises the economic aspects rather than much in the way of military threat or friction (protection of Russian companies and infrastructure; development and training of fishermen; environmental research cooperation with neighbours, etc).

Much of the conceptual direction of the document requires vast investment in new shipping. As one would expect from a country with Russia’s political roots, this is very much a state controlled solution to the problem. There is no mention of outsourcing, value for money or other ‘Western’ trivialities: this is all about Russian industry creating Russian ships, computer technology and research equipment for the greater benefit of Russian strategic objectives.

Interestingly, RMD recognises the challenge of educating, training and retaining people in the maritime arena. It is impressive in its breadth: cultivating an awareness of the maritime from school age (in the form of academies, gymnasiums, clubs for young sailors, etc through to state supported training ships) to working age and beyond (understandable close links with Trades Unions, a Russian equivalent of the ‘Military Covenant’, employment contracts, health protection, etc.). It also recognises the importance of traditions and culture – both within the Russian Naval Service and various industries, and the general cultural heritage of the nation.

Safety of navigation, Search And Rescue, medical & sanitary support and maritime infrastructure safety are all skimmed over. The primary driver appears to be enhancement of state regulation and inter-agency cooperation and communication, again supported by new hubs, equipment and training activity. Whilst overall the impression is very much a British-like focus on “shiny new kit”, there is at least an acknowledgement that these critical support activities require similar investment to make them fit for purpose.

Two adjacent bedfellows in the document, they are equally enlightening. The first offers a tantalising view of Russia as an internationally connected, engaged and active participant in the upholding of international maritime law. Based on increased foreign port visits, a more visible and active participant in international exercises and a staunch upholder of Freedom of Navigation around the world – somewhat at odds with current activity! The mobilization preparation section again shows the Russian psyche preparing itself for an inevitable foray from outsiders. Increased State Flag carrier capacity, closer coordination between ports, national transport fleets and fishing fleets and improved measures to take up civilian shipping are all prominently mentioned. Improved compensation to owners following losses due to mobilization may be of particular interest to Russians watching the ever-increasing list of equipment casualties in Ukraine. In this regard, Russia is adopting a similar “whole force” approach to the United Stated, who are currently seeking ways to renew and reinvigorate US Civ/Mil cooperation in times of mass conflict or global stretch.

This is a broad ranging, ambitious document. If enacted fully, it would require vast financial resources and there is no indication as to whether existing (or planned) Russian industrial capacity could cope with what is asked of it. Having said that, overall the RMD is at least coherent, with all of the various elements underpinned by the same economic, resource and sovereignty drivers. In many ways, it make a better ‘joined up’ case for the Maritime than the UK’s own tri-partite way of presenting the domain. It certainly presents a more compelling case for the social importance of the maritime, and presents practical ways of dealing with the sort of ‘sea blindness’ that we are always talking about afflicting the UK.

The tone of the document is also interesting – other than a passing reference to the beefing up of the combat capability of the Northern and Pacific Fleets to achieve ambitions in those regions, it reads in a mostly defensive/passive manner. There is little real discussion about force projection or ‘warfighting’ in general. It is very much a “discover, exploit, build up and then protect” doctrine…albeit with some pretty expansionist undertones when it comes to pressing Russian claims and rights in both the Arctic and Antarctic.

The response to most (all!) problems is State driven. Shipbuilding, infrastructure, energy and resource security etc are all similar threads that are mentioned in our own doctrine and national strategies however the only tool presented here is ‘the State will provide’. This approach does have benefits (and is oft called for by the retired/academic/commentariat community here in the UK), but is perhaps more practical from a Russian perspective given their vastly superior levels of domestic natural resources. Mindset and economic tradition also suggests that a Statist approach is a more natural fit for them than a Western support model.

Taken in isolation, the new RMD is a pretty sensible identification of Russian priorities and way to approach them in future; however much has been similarly promised in previous reviews and doctrine without much result. The re-invigoration of spending on Fleets and infrastructure have made it into the final print version of every such document in the last 20 years, but investment remains limited in its effectiveness. Infra seems to get a similarly short shrift to its UK counterpart. Only time will tell if Russia will have the will (or the means) to carry out much of the vision contained within this document, particularly if the Ukraine conflict continues to rumble on for many more months. It is all very well having high hopes and aspiration in the maritime, but when faced with an absolute imperative of rebuilding a significant proportion of your Land and Air forces may well see the Russian Navy miss out (yet again). There is potentially more likelihood of the ‘soft power’ elements of the vision to be properly resourced and funded (resource research & exploitation; transport; fishing fleets) given the pressure being applied by international sanctions. Any driver to improve domestic self-sufficiency will appeal, as will the ability to re-integrate with the fuel and energy markets at some point in the future.

Overall, it is an interesting (albeit painful in places!) read. Given the Royal Navy and Royal Marines have a deep professional interest in this region (whether via submarine hunting in the High North, or Littoral response Group operations around Norway and NATO’s Eastern Flank), it time well spent to glean a useful insight into Russian mindsets, and how that carries over into their doctrine.