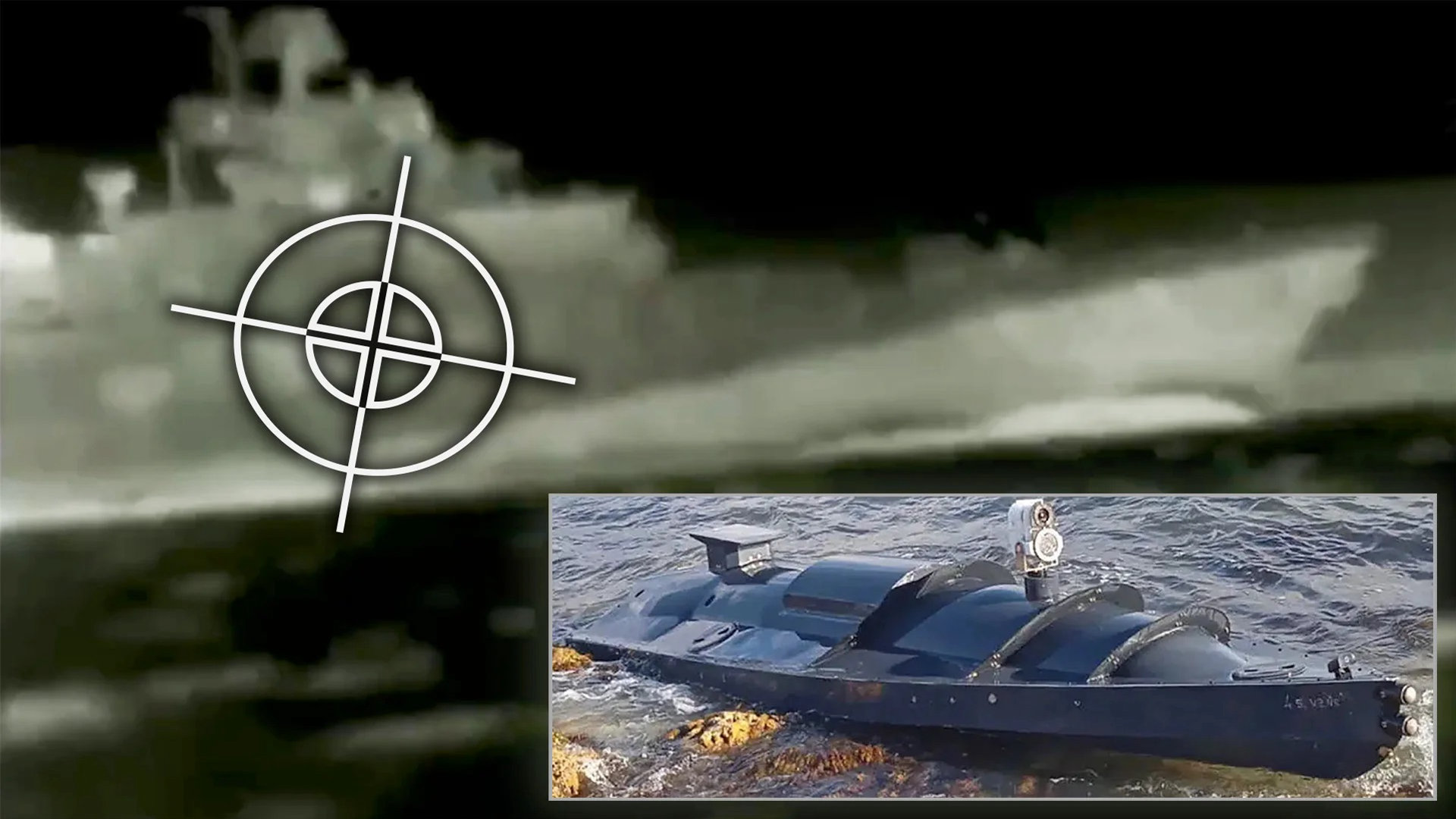 In recent years the idea of leveraging on uncrewed drone technologies for use in naval warfare has been increasing in credibility and varieties.  This is in no small part due to the proliferation of such drone technologies driving down costs, as well as maturing technology components and platforms allowing for greater reliability and stability for such platforms.

A tried and tested product

The use of uncrewed drones in warfare as a concept has already been tried and tested largely in the field of intelligence gathering and air-to-ground strike support for operations in remote territories.  They act as an effective force multiplier for combatants in the field without the limitations of crewed offensive platforms such as fighter bombers or attack helicopters, with increased endurance in loitering support over operational theatres and eliminating any risks towards human operators.  Such benefits are of marked value when seen in the context of naval warfare tactics and strategy, due to the importance of having persistent and prompt coverage of a wide battlespace so as to provide up-to-date intelligence data for processing and execution further up the decision-making chain.

There are three main areas where uncrewed drones have been utilised: uncrewed surface vessels (USV), uncrewed underwater vessels (UUV), and uncrewed aerial vehicles (UAV).  These applications of uncrewed drones in naval warfare operations have been pursued mainly for intelligence-gathering purposes, where their high endurance loitering time on station allows for maximum coverage of extensive maritime areas for data collection and surveillance purposes.

The most famous examples would be UAV platforms such as the MQ-4C Triton in US Navy service, and the “Sea Wing” UUV platform being used by China’s People’s Liberation Army Navy for undersea mapping and maritime data collection purposes.  Thus far, USVs have been the only platforms in naval usage that have been successfully weaponised; a good example would be the Rafael Protector USV which has seen active duty use by the Israeli, Singaporean, and Mexican navies for force protection and low-intensity patrol duties along key waterways and in the vicinity of ports.

Weaponising: The next steps

The latest developments for the usage of uncrewed drones in naval warfare sees the integration of dispenser pods, capable of deploying sonobuoys from a navalised UAV, built by General Atomics in the US in November 2020.  The idea that a small UAV specced out for naval and antisubmarine warfare marks a notable advancement in antisubmarine surveillance and warfare capabilities.  A sonobuoy-dispenser-equipped drone would help ease the burden on keeping crewed maritime patrol aircraft, as well as their crews, on extended patrols over large maritime areas—and provide a lower-cost capacity to rapidly deploy arrays of buoys over said areas of water.  These drones could even be centrally commanded from a crewed maritime patrol aircraft to extend the coverage footprint of a single aircraft, and act as key support for multi-angled approaches and triangulation of naval and submerged targets over vast expanses of ocean.  There is even talk of further weaponising navalised UAVs to deploy precision munitions and torpedoes, which would provide a massive force multiplier effect for the navy that deploys them.

NATO’s Centre for Maritime Research and Experimentation (CMRE) has also been pursuing the usage of uncrewed drones in naval warfare over the past two decades, with some interesting ideas undergoing conceptualisation and development.  CMRE has proposed and trialled the utilisation of UUVs for deploying and towing passive sonar arrays underwater, to be used in tracking submarine movements.  Another operationally tested concept by CMRE is in equipping UUVs themselves with passive sensors, then deploying large numbers of them into a certain maritime area to form a dynamic passive sonar net.  Such a network would enable the future application of multistatic anti-submarine warfare (ASW) tactics, using a single active sonar source to ping for undersea or surface-level threats and dozens of passive sensor-equipped UUVs to pick up on the sonar returns.  The more varied the locations and intercept vectors of such sonar returns by independently-deployed and dispersed UUVs underwater, the more accurate the three-dimensional “scanned” imagery of the maritime/undersea battlespace and naval assets will be detected.  Such concepts have already seen operational testing in naval exercises such as NATO’s annual “Dynamic Manta” ASW exercise. 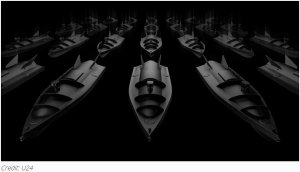 There are several issues to consider for the pursuit of wider usage and weaponisation of uncrewed drones in naval warfare.  Issues such as effective command and control and potential for weaponisation are not inherently unique to navalised drones used in a naval context as opposed to land or air theatre control usages.  However, being used in a naval context adds specific complications to these issues that navies have to grapple with.

Considerations have to be made about secure and effective command and control of such drones, made all the more critical by the sheer sizes of the maritime commons they operate in.  It would be extremely easy to lose a naval UUV or USV should data connection be interrupted between the platform and its human operators on land, and unless they are given some form of self-destructing capability, naval surface or undersea drones stand a relatively high chance of discovery and capture in very intact states by potential adversaries.  Such a thing has already happened in the past few years, when Chinese “Sea Wing” underwater glider drones were discovered in Indonesian territorial waters and subsequently captured.

The biggest issue concerning wider adoption of uncrewed drones in naval warfare would be the size of such platforms, and the potential weaponry navies are seeking to equip them with.  Drones are sometimes paradoxical in how the attractiveness of their small size (and the low detectability that they enjoy) also makes them unsuitable for naval warfare usage on the high seas.  Weather conditions out at sea can be massively variable, and oftentimes calm seas and wind states do not always exist for the safe and effective operations of small uncrewed drones most commonly used in swarm formations or localised operations.  Furthermore, naval weapons such as torpedoes and anti-ship missiles are not small in size due to their requirements of range and firepower, which makes it very difficult to effectively weaponise small uncrewed drone platforms with firepower that is capable of causing significant damage to large fleet vessels.  To make uncrewed drones large enough to carry anti-ship weaponry of significant calibre and size would entirely negate their primary advantages in low detectability and endurance, a trade off too much to consider given the still-significant costs of such platforms even if they are cheaper than crewed ones. 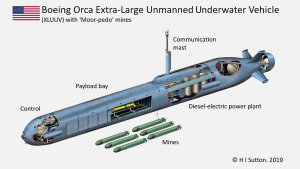 The current state of uncrewed drones in naval warfare remains centred around intelligence-gathering, with limited weaponisation success focused mainly on low-intensity and irregular combat deployments.  However, there is no reason to doubt the further maturing and successful navalisation of existing drone technology, or the development of new ones in the near future.  As information-centric and decentralised naval warfare doctrines become increasingly adopted by Western navies, uncrewed drones will be increasingly featured as key force multiplier assets both defensively and offensively in naval force structures and operations.

A War for the Mind