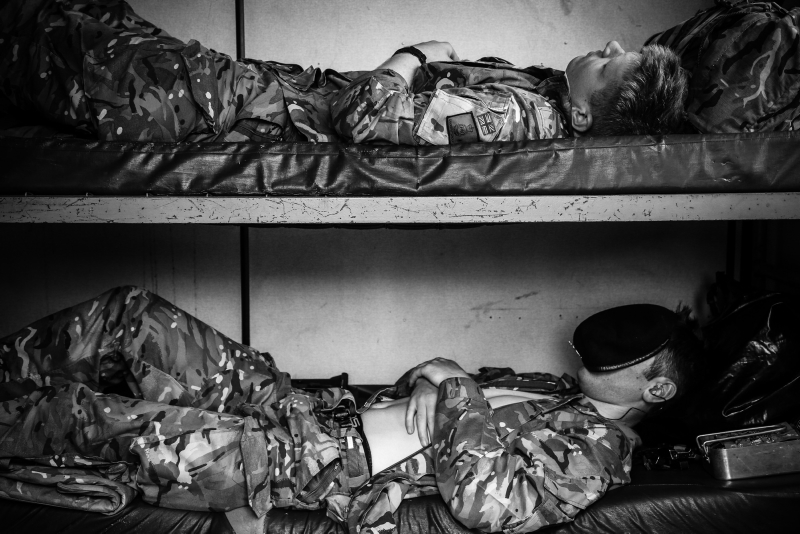 This is a short extract from a large-scale study1for which Sarah conducted more than a hundred interviews and surveyed almost 900 British and German Army Officer Cadets between 2014– 2015. All research results can be found in her book “Identity, Motivation and Memory: The Role of History in the British and German forces” which has just been published by Routledge.

This is the first of a series of posts, which give you a glimpse of what to expect in the book.

While almost half of the surveyed British cadets (49%) indicated that they were keen to fight in wars, 89 percent of the German cadets explained that ‘fighting in wars’ was less importantor not important at all in their decision to enlist. Most of the German cadets argued that due to Germany’s negative militarist past they had learned that war was nothing to strive towards, nor something one should aim to experience in life. Significantly fewer cadets in Germany than in Britain openly admitted that they were keen to experience combat.

Particularly the British cadets who planned to leave the army after their short-term commission has ended perceived their time in the army as an adventure that would grant them with the opportunity to have unparalleled experiences. In contrast, most interviewed German cadets who have to commit to a minimum of 13 years of service, (with many of those cadets aiming for a military career for life,) were very uneasy about the experience of events that related to war and combat, even though they were well aware of the fact that this element might become a part of their job in the future.

Asking the aspiring British officers to make a statement about why so many of them were keen to experience combat, most Sandhurst cadets explained that it was less about the chance to fight against others, but rather to put into action what they have learned during their officer training.

“Getting combat experience – this is the only job in the world where you get to do that. It’s the opportunity to do something genuinely life-changing. (…) If I would have gone off and worked in a bank, your life would be obsessed with figures and money and you could lose or gain people lots of money and their life will change – but not in the same way as sending a bullet out in someone’s direction. The money side of things is a boundary that people have put on themselves (…) but life or death is like a solid real world problem. (…) as opposed to what society told us is important.” [British OCdt]

The uneasiness of German cadets towards topics such as war, combat and the very idea of military power does not only reflect societal perceptions in Germany, but also Germany’s difficulties in coping with its military past.2

“I imagine that some Germans must have also been really excited when the Second World War started and then they learned that there is nothing honourable about dying for your Vaterland. And we have adapted this attitude. (…) if people speak about adventure, being a sniper and stuff like this – it reminds me of the Call of Duty language – that’s all nonsense… (…) that’s just them being naïve, young and bored. If you talk to soldiers who have experienced combat, they will have a completely different perspective and most of them are not keen to repeat their experiences.” [German OCdt]

While many British cadets described the potential experience of war as both, exciting and challenging, German cadets exclusively used critical words in reference to their potential involvement in a war. Through asking the Sandhurst cadets who admitted that they were keen to experience war why not all cadets shared this opinion, one cadet stated that it was ‘not politically correct to want war,‘ despite the fact that many people have a fascination for war, something that is made particularly apparent in contemporary literature, movies and video games – and that also in Germany.

“I don’t see how the reality of killing someone is foreign to certain people in the whole idea of joining [the British Army]. (…) I think I have to be very upfront with the idea that I expect it to be a part of my job – whether it’s at my command or at my hands. It’s a reality of the job. (…) I don’t lust for it, but I don’t shy away from it either (…) Socially you have to say that you are uncomfortable with it. I mean, if you turned around in society and would say “I’m comfortable with the idea of killing” it is a real shock for certain people. (…) I think it’s just the reality of the army that I am very at ease with. I mean (…) they talk about “destroying” or “defeating” the enemy – what do people think that actually means? (…) – it means you’re gonna go and kill them.” [British OCdt]

Classifications are always imprecise because individual characteristics, personality and desires are subject to change. Sociological studies, however, require forms of measurement whilst also acknowledging that analytical generalisations are inherently limited and do not necessarily provide universal truths. It therefore goes without saying that obviously not all British cadets were keen to experience combat, just as not all German cadets were opposed to the idea to ‘fight in a war’. However, it seemed striking that the British and German cadets’ dealing with war and combat were deeply rooted in the perception of those categories within their respective societies and a very different dealing with the national (military) past.

“Obviously I would go abroad if I had to. It’s part of my job, but I’m not keen to do it. As I see it, the difference is historically based. I guess because the British soldiers had their Empire, British soldiers are still proud and partly educated in this direction and I do understand their frustration when they do not get the chance to go abroad. But me, I keep thinking about all the things which might happen and that everyone should feel lucky if they do not have to risk their lives. But because the British people have a very cosmopolitan outlook (…) I believe that this feeling and desire is somehow embedded in their national pride and thus also in the military. We Germans think differently as a result of all the breaches in our military history.” [German OCdt]

This is a 1 of 5 short extracts from a large-scale study1for which Sarah conducted more than a hundred interviews and surveyed almost 900 British and German Army Officer Cadets between 2014– 2015. All research results can be found in her book “Identity, Motivation and Memory: The Role of History in the British and German forces” which has just been published by Routledge.