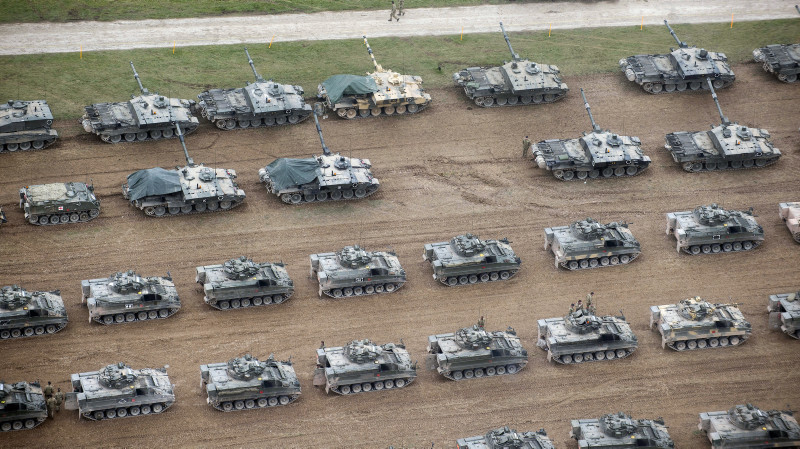 At the 2017 Royal United Services Institute Land Warfare Conference the importance of the Division in modern operations was repeatedly highlighted.  The Chief of the General Staff (CGS) commented “the first thing I would stress… is the importance of the Division”.  Joint Force 2025 calls for a ‘war fighting Division optimised for high intensity combat operations’.  This marks a strategic shift for British defence policy which had become focussed on maintaining intervention forces.  The British Army has two divisions; 3rd (UK) Division is the war fighting ‘reactive force’ commanding Armoured Infantry Brigades with Challenger 2 and Warrior Infantry Fighting Vehicles.  1st (UK) Division forms the ‘adaptive force’ for tasks such as defence engagement and commands Light Infantry Brigades.  The reforming of a warfighting Division is hand in hand with the wider Joint Force 2025 plan to project power and provide military options.

This article argues that the Division of 2025 is lighter and less capable of high intensity combat than the Division of today.  It makes three key points. Firstly, that current threats point to a future in which armour and firepower are increasingly important and that we should not abandon heavy armour.  Secondly, that the planned restructuring of Armoured Infantry Brigades is a significant cut in the Divisions warfighting capability.  Thirdly that Strike Brigades, whilst offering new strategies, are not focussed or equipped to deliver effect in high intensity combat operations.  This undermines the idea of a warfighting Division.  To be successful, the Division of 2025 needs additional heavy armour and anti-tank capabilities to overmatch likely adversaries and ensure its freedom of manoeuvre.  Only a genuine fighting Division will provide the options that the UK may require to counter future threats.

Likely scenarios for deployment are varied but pose significant problems for the Division of 2025.  Russian experience in Ukraine has shown that tanks from the 1970s are decisive in ground combat and across a modern battlefield.  Deterrence scenarios on NATO’s eastern flank largely centre on defending against a conventional armoured attack highlighting the need for credible anti-armour and manoeuvre.  Irregular adversaries, such as the Islamic State, are using armour (including modern main battle tanks) with great success showing that we must consider the threat in all theatres.  Looking at this these trends, future Divisions must put a force on the ground in sufficient size to both maintain credibility and ensure its own freedom of manoeuvre against adversaries who have significant capabilities to deny tactical freedom of manoeuvre. Whilst future trends are difficult to assess, armour and firepower will always remain decisive in combat.

The Division of 2025 will contain two Armoured Infantry Brigades, two Strike Brigades and a range of supporting assets including an additional Light Brigade from 1st (UK) Division.  This will be deployed within a wider force package including air and naval assets as part of Joint Force 2025.  The entire force gives a depth of capabilities from intelligence to strategic strike assets.  The detail of the reform hollows the capability of the warfighting Division for two reasons.

Secondly, Strike Brigades are unlikely to be able to hold a ‘front line’ or engage in high intensity conflict to counter modern threats.  Strike Brigades, which will use the Ajax ‘medium’ armoured vehicles and a yet to be procured Mechanised Infantry Vehicle, are designed for operations at a reach of up to 2000km and this provides manoeuverist options.  The Ajax family of vehicles is impressive with connected intelligence and excellent all round protection.  With a new 40mm cannon and armoured piercing ammunition, Ajax is likely to be able to successfully engage armour up to T-72.  But this falls short of the capability it is replacing: Challenger 2 main battle tanks in Armoured Infantry Brigades.  Ironically, the Ajax vehicle Strike Brigades are based around, would be suitable for employment in Armoured Infantry Brigades.  Strike Brigades lack the heavy firepower currently available to Armoured Infantry (120mm gun v 40mm cannon) and do not have the firepower required to successfully overwhelm future adversaries.  It is not clear how, or if, the concept will fit into a Division plan for conventional high intensity conflict.  It is easy to see a scenario where the lighter nature of Strike means they cannot face opponents without considerable risk, resulting in reduced military options.

Options that could maintain the planned structure without hollowing the Division are:

Joint Force 2025 is an impressive plan of military reform that will provide military options.  Inside that, the warfighting Division of 2025 is a paradox.  On one hand we talk of war fighting.  On the other we hollow the very capabilities needed to do it.  Despite the addition of new technology, the warfighting Division of 2025 is lighter and less capable than the Division of today.  The current design needs to be amended to reflect the nature of high intensity conflicts.